European Microfinance Week evolves each year, with new thematic streams, new Action Groups, and, of course, a new major area of debate based on the year’s European Microfinance Award topic. One constant are the plenaries that bring together all participants regardless of their professional background or interest. These plenaries always tackle the big issues and bring the top people in their fields to the podium – and at EMW 2017 there were three.

The opening one was on the European Microfinance Award – this year on Housing – which gave representatives from the three finalists’ organisations the chance to present their programs. This kicked off with a keynote address from Sandra Prieto from Habitat for Humanity’s Terwilliger Center for Innovation in Shelter during which she laid out the key challenges in increasing access to affordable housing: lack of collateral, lack of guarantees, a relative lack of funding for housing finance, the need for Technical Assistance to help clients either build homes from scratch or expand or otherwise improve their homes, and the problem of land tenure. Despite these challenges, housing microfinance has massive potential for social impact and diversification of MFIs’ portfolios. The three Award finalists, Sandra said, have common elements: first, they all address not only access to housing, but also other housing-related social needs such as water, sanitation, health and energy; and they each put client needs at the centre of their interventions.

Augusto Paz-Lopez Lizares-Quiñones from Peru’s Mibanco, focused on the ‘ecosystem’ approach of Mibanco’s housing initiatives and products. As he put it, Mibanco’s housing finance goes beyond products, but is seen as a business model which creates and leverages commercial alliances to address other needs such as sanitation. Frank van der Poll of The First MicroFinance Bank – Afghanistan emphasized the bank’s adaptation of its products to its rural clients, with seasonal re-payments (so as to accommodate harvest periods), and with a TA component which addresses earthquake resistance and water/sanitation needs of clients. And Álvaro Aguilar Ayon of Cooperativa Tosepantomin in Mexico said that Tosepantomin believes housing is key to improving the quality of life of its members – the cooperative’s core social mission. It offers services according to members’ needs, engaging cooperatives in various activities such as the production of bamboo (a local material used in the construction of the houses) and works according to a Sustainable Household model, thus collecting and using rainwater, solar energy and organic composting. 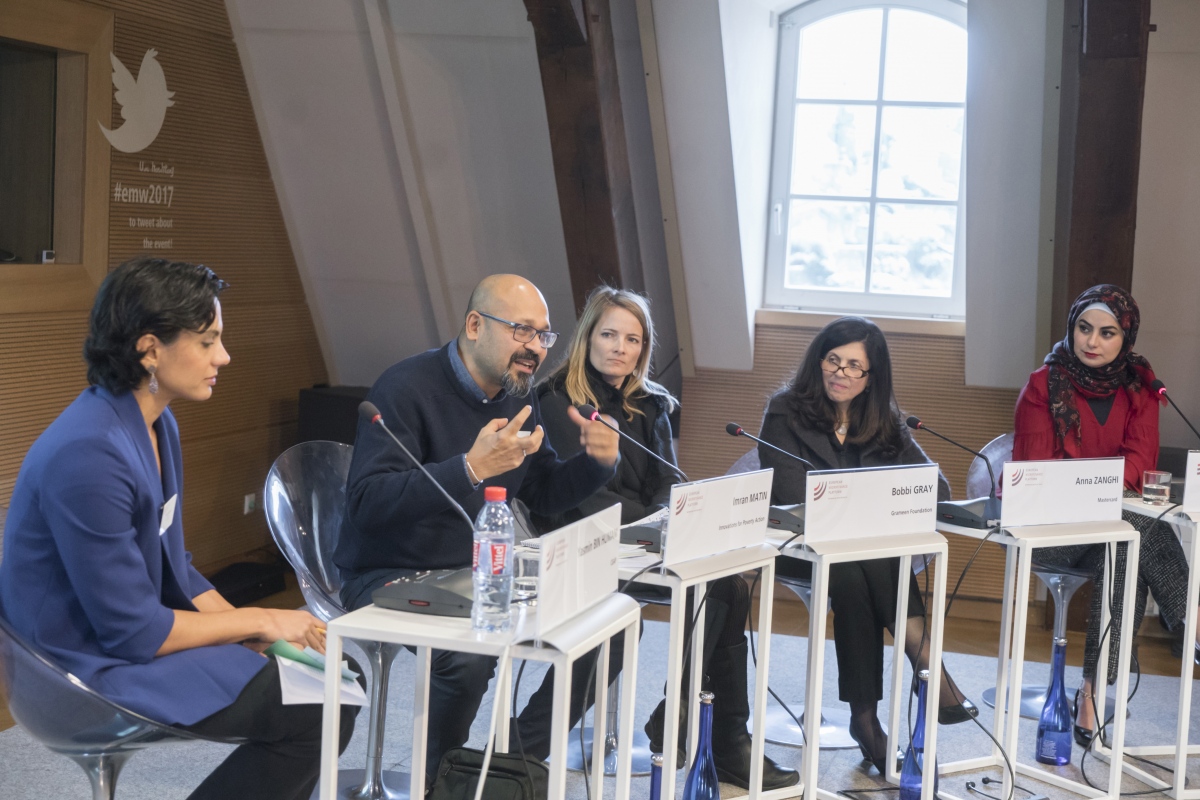 The second plenary of the conference was on Women clients ≠ women empowerment: beyond the numbers and was moderated by Yasmin Bin-Humam of CGAP with speakers Bobbi Gray of Grameen Foundation, Imran Matin of Innovations for Poverty Action, Anna Zanghi of Mastercard and Bdour Al-Hyari of Microfund for Women (Jordan). Empowering women has been a cornerstone of microfinance since before the term microfinance - or even microcredit - existed. It continues to feature prominently on publications and promotional literature. But what does it really mean to empower women?

Pursuing empowerment, the panellists said, “requires understanding women and their needs within the environment in which they live…and considering them not as individual clients, but…as members of households”. A deeper look at the data, they argued, demands a multi-dimensional and nuanced response, that goes far beyond just how many women can receive microcredit.

There still is a long way to go. In some regions, very few women have access to credit or a bank account. Even when they do, it may be husbands who truly make financial decisions, making women’s access to finance a mirage. Anna said that MasterCard takes a systemic approach to women empowerment, determining what the gaps in the ecosystem are and how they can overcome these. They also determine how they can leverage technology to provide opportunities and innovative solutions.

Bdour said that Microfund for Women defines women empowerment as requiring material, cognitive, perceptual and relational change. Of these four levels, financial services have not yet been successful in relational change. Bobbi of Grameen Foundation adds a fifth level to work on: structural change – the anthropological barriers that keep women from feeling empowered to be financial actors. Imran of Innovations for Poverty Action said that the current challenge for women empowerment is intra-household dynamics, and how to measure this. More details on the discussion in this intriguing session are covered by Bob Summers in MicroCapital.

The third and final plenary of European Microfinance Week was the closing session: Microfinance: positioning ourselves for the next decade. Moderated by Paul DiLeo of Grassroots Capital Management, the panel included John Alex of Equitas Small Finance Bank, in India; Tim Ogden of the Financial Access Initiative; and Renée Chao-Béroff, of PAMIGA. How will the sector position itself in the next decade? Who will be the new providers? What client segment will be reached? How will technology enable outreach without compromising social mission? 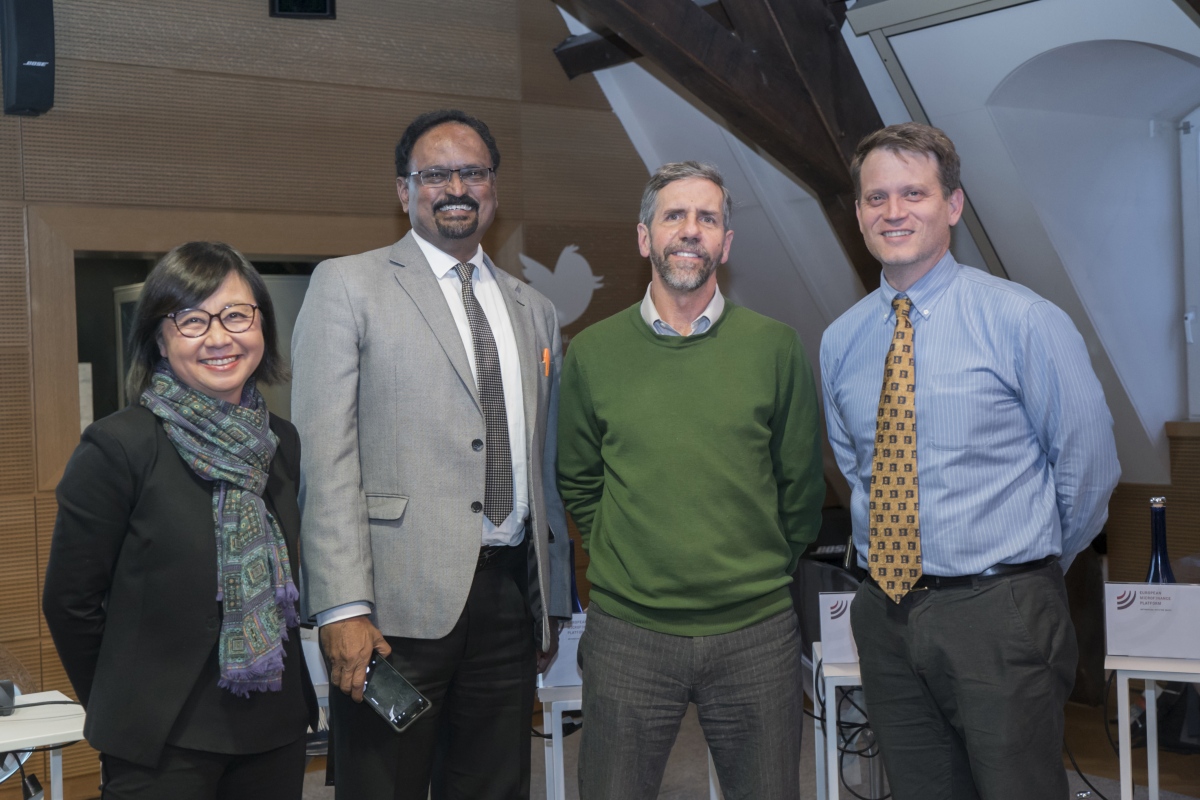 The industry is at a crossroads of sorts, or at least in the midst of a profound ambivalence. In one direction lies abrogation of social mission, and a focus on pure access and profitability. In the other lies recognition that until microfinance makes itself obsolete and commercial banks genuinely reach low-income segments, real caution is needed. As the panel put it, microfinance should stick with what it knows best, and turn back to the fundamentals: smart financial services which are client and impact-oriented, and part of a larger ecosystem. Or as Paul himself has summed it up: “MFIs retain the space that they have always sought to occupy, because none of the newer entrants genuinely wishes to occupy it:  specifically, innovating to do the hard work of lifting poor families from poverty, a task that conventional banks, FinTechs and profit hungry investors might pay lip service to, at most.”

There is a need for investors that have objectives aligned with this task. Neither banks nor FinTechs nor profit-driven business models “cloaked in impact jargon” will tolerate the trial and error, costs and sub-optimal profits required to address the intractable challenges facing the poor in all its dimensions.

FinTech remains the elephant in the room whenever these discussions reference ‘impact jargon’ or ‘lip service’. The challenge, as Tim said, is that while FinTech has provided great contributions to microfinance, digital finance in itself is not committed to high-quality services that have a social impact purpose. “FinTech’”, he said, “is no silver bullet.” (Or rather, it is, because the proverbial silver bullet is itself a myth).

Renée argued that MFIs that see themselves as a means and not an end in impact value chain will be able to innovate, while the others will ‘miss the train’. John argued that reaching “massive demand” such as in India “will require specialisation and sychronisation of products”. Tim was relentlessly contrarian: “The microfinance movement began with group of institutions that cared about customers; the current digital providers expressly don’t…they care not about providing value but about extracting value”. But the increasing involvement of commercial banks “will be an amazing thing”, he said. It will mean that microfinance is really achieving its role of bringing the unbanked into the formal financial system. This, itself, will be about more than just extending access to microfinance clients. Or as Paul has since written after the plenary: “Eliminating poverty is hard and will require continuous innovation and openness to new products, business models and strategies.  This will likely require new thinking about how microfinance can combine with other services to the poor to form an “ecosystem” of support rather than being seen as an end in itself”.