Or the more things change, the more they stay the same...  Sometimes it seems as though there is no shortage of proverbs when it comes to looking at the seemingly inevitable credit business cycle. In my last blog I took a look at the unprecedented stability of the US banking sector during the 50 years following the Great Depression. Recent news from Mexico – in the form of a study by the Microfinance CEO Working Group – shows just how far away we're from that world.

There's much to say about that study, and also the Working Group itself, which deserves credit for the willingness to publicly share the data, no matter how distressing the findings might be.  And yes, they are distressing.  If there's one thing to take away from the study, it's this chart: 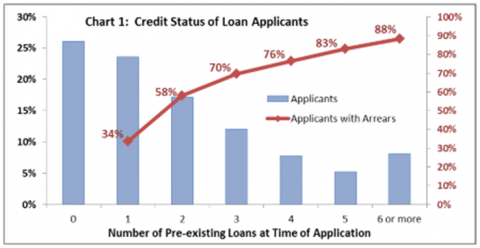 The distribution of multiple loans above includes figures just prior or during major repayment crises in Andhra Pradesh and Bosnia, respectively. By comparison, Cambodia was a market where three microfinance investment managers (Incofin, BlueOrchard and Oikocredit) were sufficiently concerned about the risks of overindebtedness that they conducted a detailed borrower survey.

Next to these three markets, Mexico is in a league of its own. The number of clients holding 5+ loans is double that of Bosnia. The numbers are also consistent with observations from the ground (see here, for example).  For reasons I reviewed already a year ago, Mexico worries me deeply. Its potential to damage the reputation of the microfinance sector is greater than that of Andhra Pradesh. The fact that little seems to have been done since then worries me even more.

Set aside for the moment the finding about arrears, which are so extraordinarily high as to be essentially unbelievable.  In effect, they imply that 59% of existing microfinance clients in Mexico have at least one loan in arrears.  Were this in any way comparable to traditional PAR30 figures, this would already constitute a repayment crisis. The rest of the data in Mexico suggest that they're probably not true, and the authors do raise serious questions about the reliability of repayment data in the study.

But there's no reason to believe the data on multiple borrowing to be faulty, in which case microfinance lenders in Mexico (along with the many competing consumer lenders and others) are literally on the brink. When will the sector collapse?  I don't know. One never can say for sure. There's even a chance it might not collapse. But maintaining the status quo, let alone continuing to grow the sector in this situation, is tantamount to sitting in a boat half-filled with water. It may float for now, but even a minor wave will capsize it.

The Microfinance CEO Working Group has correctly called upon the regulators in Mexico to take charge.  They are absolutely correct in doing so, and I cannot stress enough the urgency of the situation. Every passing month not only increases the chance of crisis, it also reinforces complacency. After all – doesn't the fact that the boat is floating prove its seaworthiness?  Maybe things aren't so serious after all?

Nothing could be more foolhardy. We've seen this movie many times before.  Remember 2006?  Persons no less esteemed than Alan Greenspan argued then that the mortgage bubble in the US either did not exist or at least did not pose a serious problem. Didn’t we see this in Iceland, Ireland, Spain? In 2009, a year before the crisis in Andhra Pradesh, Indian MFIs were more aware, at least publicly so.  The then-formed Indian MFI association MFIN had put forth a Code of Conduct to limit overlending, and also embarked on an effort to create a credit bureau.

Though some certainly meant it seriously, for too many, the effort was but an exercise in PR. Just months after SKS, the leading MFI in the country and the largest member of MFIN, had signed on to the Code of Conduct, it rolled out an incentives scheme (literally called "Incentives Galore"!), under which one loan officer signed up 273 new groups in a single month – 1365 new clients.  Anyone with the most passing knowledge of microfinance would find that number appaling. It is. It also demonstrates how efforts to avoid a crisis through self-policing can't work in competitive markets that are already oversaturated. Mexico is no exception.

There is only one case I know where such efforts have succeeded – in Bangladesh, where the 4 leading MFIs seemed to have successfully averted a crisis in 2007-08. However, the characteristics of the market in Mexico make such an outcome not only unlikely, but downright impossible. Certainly not with its very high interest rates, a highly diverse market of thousands of MFIs and consumer lenders, a microfinance sector with no prior experience in crisis management, and borrowers who are relatively new to microfinance (certainly compared to Bangladesh, where MFIs are now serving their 3rd generation of clients).

Speedy and effective action by the regulator is an absolute necessity. Should it fail, the industry – and most importantly, the clients – will suffer greatly.  But at this stage, the onus will fall on the public authorities that stood by and watched it all happen.  They have been forewarned.

Do you see any similarities between Peru and Mexico in this regard? I am the first to point out that MixMarket data is deeply flawed, but in the absence of a better alternative I use it as somewhat indicative. The microfinance sector of Mexico is approximately $5bn, Peru is slightly over twice this size. However, Mexico has a population 4x that of Peru (120m vs 30m). Thus, on this admittedly simplistic metric, it appears that any over-indebtedness concerns in Mexico might be at least as worrisome in Peru. Sure, such statistics do not consider the concentration of debt, and the Mix does not necessarily represent all lending. But given the undignified end to MiBanco in Peru recently, and rising over-indebtedness and PAR, I wonder if you are equally concerned about Peru? Or are there mitigating factors in Peru which lessen the extent of a potential problem? But superficially speaking, double the lending with a quarter of the population suggests to me things in Peru could be even worse than in Mexico, albeit at lower interest rates. What do you think? If you had to bet on a collapse (however that may be defined) - who is your money on?

A collapse in Mexico would be very serious, but one in Peru could be catastrophic.

I think both markets warrant concern, but there are also many differences. First, I wouldn't put much stock in the overall penetration measures (i.e. loans / population). For the numerator (the loans), microfinance in Mexico includes a vast number of operators who don't fall under the normal market measures, whether on MIX or elsewhere. So the real figure is much larger than the $5bn. Peru doesn't seem to have the same problem, in part because its lending is well reported via the regulator.

And indeed, the regulator's presence is what separates the two markets the most -- in Peru, you have a government entity that is almost certainly well aware of the problems, and, having invested so much effort and own reputation in the microfinance sector over the past decade, the Peruvian government & regulator have strong incentives to avoid a full meltdown. That doesn't seem to be the case in Mexico. And that's exactly why I worry about the country so much more.