Home / Blog / Inexorable growth in Cambodia: Like a rolling stone?
10 May.

Some lessons are unexpected. Back in 2000, during the height of internet stock craze, I was an amateur manager of a small stock fund consisting of 8 smalltime shareholders who were all my relatives. Being a bit of a contrarian, the fund focused mainly on biotech stocks, which were enjoying quite a strong run, even if not quite as exuberant as dotcom stocks. The fund did well – a roughly 250% return over 3 years, but as always, the lesson was not from this relative success, but from a far larger failure – the missed opportunity to bank a 750% return.

One stock stands out in my mind:  Incyte Pharmaceuticals, which I had bought variously when it was trading in the $10-$20 range during 1998-99. By early 2000, it had crossed $100/share and was rapidly heading higher. At the time, I was well aware that there was no fundamental reason behind this runup – it was classic speculation. The question was when to sell?  Internally, we had set a target of $150 (at a time when it was nearing $140 and rising rapidly). It was not to be. We sold some weeks later when it had slid down to the $60s…

Call me greedy and stupid. But I learned my lesson – I’m not made for stock trading! More importantly, it was my first introduction to the dangers of inexorable growth, which creates expectations that are difficult to reset and that far too often lead to disaster.

No, I’m not implying that microfinance in Cambodia or elsewhere is a dotcom-level bubble. But what’s at work is the basic mathematical principle – sustaining a high growth rate becomes increasingly difficult over time. A young industry may well grow 30%-40% annually for many years; for a mature one, this is nearly impossible. And all young industries mature eventually, so growth must necessarily slow.

Watching Cambodia over the past several years has become increasingly uncomfortable for this very reason. Its MFIs have been averaging annual growth of 45% since 2004. And while they started small, that is no longer the case. Even so, as of Q1 2016, they posted 41% year-over-year growth – and show no sign of slowing. The $1.4 billion growth in loan portfolio in 2015 was larger than the entire market in 2011.  The big question the sector seems unwilling to tackle is how long can such growth go on? 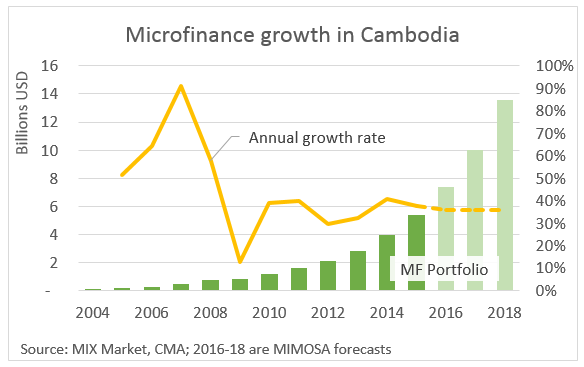 The answer from MIMOSA is simple – not much longer. Now would be a good time to slow down. A lot. But let’s set aside MIMOSA and look at a different perspective that’s more commonly used by macroeconomists – domestic credit to the private sector as a share of the economy. On that score, Cambodia is yet again an outlier on several fronts.  Continue reading ->