In the fourth in a series of blog contributions throughout the year to complement the European Microfinance Award 2022 on 'Financial Inclusion that Works for Women', Bobbi Gray from Grameen Foundation USA and Piyush Singh from Grameen Foundation India describe the opportunities mobile money can offer to women entrepreneurs, and the persistent sociocultural barriers that prevent them ‘coming forward’. 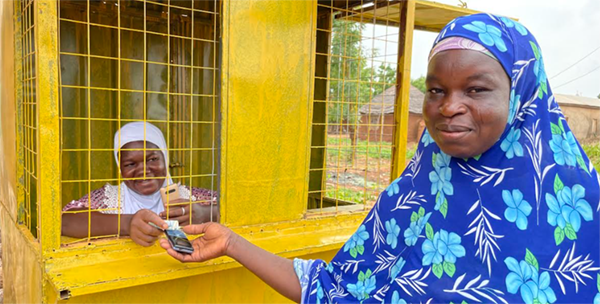 Around the world, women do between two to ten times more care work than men[1], with countries like Ghana and India on the extreme end. Time poverty and caretaking responsibilities are indicated as particular barriers that constrain women’s economic participation. Female entrepreneurs interviewed by Grameen Foundation in Northern Ghana note that household chores are “time consuming, making our business less productive” and the nature of household chores “makes it difficult to [take] up certain businesses,” limiting both when women can work, as well as the types of businesses in which women can participate. Sociocultural gender roles that expect women to address the caretaking and household workload increase economic inequality amongst men and women. These constraints to economic participation limit women’s financial inclusion as well, for the very same reasons. As one female entrepreneur shared, “it’s the culture of the people to always ask permission from your husband or head of family before going to any place. The reason for the request must be made clear,” except in the case of an emergency such as death, fire, or health. “Women are unable to fully access financial services because of the time spent on waiting for permission from their male counterparts.”

On the one hand, the solution seems easy: increase the networks of female mobile money agents. On the other, female mobile money agents are entrepreneurs and face the same social barriers as other women do when starting up a new business and accessing services. As one female mobile money agent in Ghana explained, “unlike my male colleagues I go home early [to finish housework] and that affects my turnover.” Another female agent shared, “In simple terms, my failures and success usually depend on the level of support I get from my husband.”

Recently, Grameen Foundation, along with its implementing partners in Northern Ghana, hosted a webinar to share the results from its gender and inclusion analysis and a rapid needs assessment that is informing the design and implementation of a 2.5 year initiative that seeks to recruit and train female mobile money agents, leveraging the MTN mobile money platform as a stream of business. While the MTN representative noted that becoming a mobile money agent is simple (a person simply needs to come forward; submit business registration and identification requirements; and meet the necessary liquidity investment) the MTN agent network remains primarily male-dominated. MTN shared during an interview, “We don’t have a lot of females working as an agent. If you see a woman working in the business, she is not the owner. She’s doing it for someone else.”

Similarly, in India, it is estimated that fewer than 14% of mobile money agents are women. A recent study conducted by Grameen Foundation found that only 54% of female mobile agents, compared to 97% of male mobile money agents, were the primary decision-makers for the mobile money business. Female mobile money agents were less likely than men to be satisfied in their role as an agent, earned less income than their male counterparts (especially when incorporating their overhead expenses) but were also less likely to indicate that they found engaging with female clients to be difficult. The baseline report and the webinar conducted under the Business Correspondent Network Manager (BCNM for short) Experiments and Demonstrating Scale (BEADS) project has more insights on the women agents in India.

The reality is that, for many women wanting to become a mobile money agent, the process breaks down at the “coming forward” stage. Women’s ability to identify their own strengths, to find time during an already-packed day, and the requirement for spousal permission and support means few women self-identify and come forward. One female mobile agent shared, “my husband and I collectively made the decision, [but] his role was to give the go ahead and to give the assurance that he will support in terms of the initial investment to start the business. It is difficult to get all those documents, so we mostly rely on relatives or husbands to facilitate the registration.”

These findings suggest we cannot underestimate the importance of recruiting “the family” when recruiting for female mobile agents, particularly in rural communities where social and gender norms are at their most conservative. A debate has played out across Grameen about how to engage men in recruiting and growing a network of female mobile money businesses. While there is deep concern that a spouse could take over a mobile money business, the truth is that husbands and wives (and other family) often run these types of businesses together when you ask them. Therefore, not involving a spouse during recruitment of female mobile agents could result in no woman coming forward at all.

In fact, in India, a few BCNM institutions have shared that whenever their employees call a female agent to discuss the business, it is mostly the husband, father or brother who answers the phone call, and it is only after the initial conversation and screening by the male family member that the female agent finally is allowed to speak to the BCNM employees. Such instances make the process even more painful and time consuming for the BCNM institutions to recruit a female agent. Hence, household-level dialogues with the male and female members at the time of agent recruitment and onboarding, and onward, can ensure that female agents can garner household support for their new role, anecdotally resulting in increased retention and success over time. Moreover, improved training of male BCNM employees to engage male household members of the female agents in a gender-sensitive manner can also improve female agent recruitment.

As we look forward to celebrating the finalists for the European Microfinance Award 2022 on 'Financial Inclusion that Works for Women',  these experiences in India and Ghana remind us that it is not just the design of the products themselves that matter for women, but the means through which they are marketed and delivered. When this involves female entrepreneurs in their capacity as mobile money agents, we must not underestimate the supporting environment they need as well, to be successful business owners and conduits for women’s access to digital financial services.