Leveraging the Power and Progress of Women’s Financial Inclusion to Tackle Global Challenges: Book Review of Small Loans, Big Dreams: Grameen Bank and the Microfinance Revolution in Bangladesh, America and Beyond by Alex Counts

Leveraging the Power and Progress of Women’s Financial Inclusion to Tackle Global Challenges: Book Review of Small Loans, Big Dreams: Grameen Bank and the Microfinance Revolution in Bangladesh, America and Beyond by Alex Counts

In the fifth in a series of blog contributions throughout the year to complement the European Microfinance Award 2022 on 'Financial Inclusion that Works for Women', we have something a bit different: Myka Reinsch Sinclair reviews Alex Counts’ latest book ‘Small Loans, Big Dreams: Grameen Bank and the Microfinance Revolution in Bangladesh, America and Beyond’, which tells stories of how financial inclusion has, for decades now, leveraged small but crucial gains to released women’s dormant economic potential and tackle global challenges. 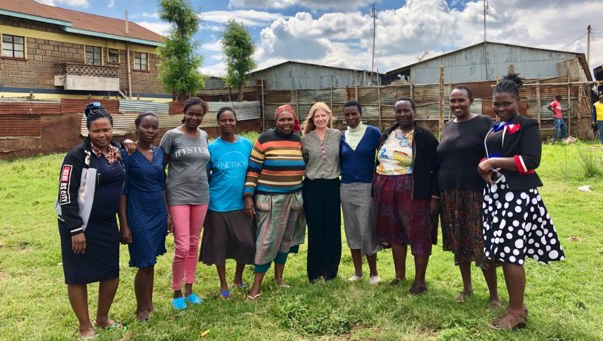 With the European microfinance community focusing special attention on women’s financial inclusion and celebrating the impressive work of the 2022 European Microfinance Award finalists, the publication of an updated edition of Alex Counts’ Small Loans, Big Dreams: Grameen Bank and the Microfinance Revolution in Bangladesh, America and Beyond could not be better timed. As an inclusive finance practitioner with over two decades of experience working at the level of communities, financial institutions and the broader sector around the globe, I found this book particularly inspiring as we look toward new horizons in women’s financial inclusion. By illustrating the tangible and intangible benefits of microfinance for women and their communities across two distinctly different contexts, the book inspires me to look more closely at how the powerful network effect of millions of financially included women can be leveraged to address major global challenges facing the world today.

Small Loans, Big Dreams was initially published in 1996 during the decade leading up to the 2006 Nobel Peace Prize award to the Grameen Bank and Muhammed Yunus. This latest edition not only retraces the birth and evolution of the Grameen Bank and its pioneering methodology, but also offers thoughtful analyses of the evolution of the microfinance sector and women’s economic empowerment over recent years. By describing what he witnessed on the ground with women’s groups and Yunus’ team in Bangladesh during the early years of Grameen Bank, as well as through investigative research of several female entrepreneurs who were early adopters of microfinance in a notoriously poor inner-city neighborhood in Chicago, Counts revisits the roots, promise and challenges of the movement that “started a revolution in the banking and anti-poverty fields”. Through his update chapters, we get to examine the critiques, accomplishments and crises the sector has weathered over the years, alongside the ups and downs of individual women in Bangladesh and the United States—and the broader societal changes that have both resulted from and influenced the practice of women’s financial inclusion around the world.

Often reading like a novel, the book plunges us into the worlds of microentrepreneurs in rural Bangladesh and urban Chicago, where we get to witness the lives, dreams, fiascos and triumphs of poor women microfinance clients through their own voices. We get to see not only the nuanced impacts that a stepwise series of small loans has on their individual livelihoods, but also the far-reaching and less measurable effects of the women’s collaboration amongst themselves, at times even after they have stopped being microfinance clients. Whether in a developing country or a world industrial power, these close-knit groups of marginalised women clearly value the opportunity to work together “in an environment where their economic (rather than domestic) responsibilities are the center of attention.” Although the original Grameen Bank model of group solidarity loans for women has since given way to more individualised lending and banking approaches for women, many successful microfinance institutions have found ways to maintain the upside of small group cooperation and the far-reaching effects this can have on the surrounding community. 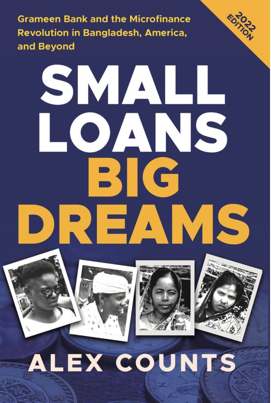 Throughout his book, Counts’ stories of the women’s interactions with their peers reveal the invaluable moral support, problem-solving, encouragement, networking and information-sharing that enable them to gain confidence, skills and economic resilience. We witness how one group successfully counsels a member to shift her energies toward higher production and sales of her delectable cookies so she can land enough extra cash to get her loan out of arrears; we see how group members step in when needed to babysit one member’s toddler or provide quick manual labor so another member can meet a production deadline. We also watch women compare market information, introduce a fellow member to a new supplier, and pool funds to afford a shared retail booth at a festival and place a bulk order at a discount. As Counts puts it, the groups become almost like “boards of directors” for the members’ nascent microenterprises. These mutually supportive business-oriented relationships that the women build among themselves over the course of their microfinance journey prove invaluable not only to the women’s confidence and morale, but also to the profitability of their businesses and their financial performance with the microfinance institution.

Drawn into the lives and plights of poor microfinance clients in two distinct geographic and cultural contexts, we also begin to perceive surprisingly comparable benefits that go beyond household-level economic gains to improve race relations, social prejudice, women’s roles and domestic violence in their communities. In Bangladesh, for instance, we see how the biweekly interactions of women across ethnic and religious barriers leads a Muslim woman to realize the injustice of community discrimination and stand up for her Hindu neighbor’s basic rights. In Chicago, we witness the courageous, win-win idea of an African American woman who negotiates the sale of her products in a Korean grocery—thereby attracting black teens to the store, boosting her own sales and adding to the grocery’s profits, while building bridges across traditional race divisions. Later, when one Chicago woman’s repeated encounters with domestic violence can no longer go ignored, her group finds a way to imply to her abusive partner that she will no longer receive loans if the beatings continue—and they stop. Next, we cheer for a Bangladeshi woman who initially defers to her husband and covers her face reflexively with her scarf during bank meetings but who gradually emerges as her business thrives—eventually meeting with a male interviewer to confidently present her microenterprise operations while her husband stands by wordlessly at her side. Finally, when Yunus points out their power in numbers, Grameen women stream to the polls and end up voting down the party that would have curbed their new-found access to self-determination.

While practitioners in the sector continue to innovate and expand access to appropriate financial services for women, it is important for us to keep in mind the unique value that microfinance offers to unite women, bridge socioeconomic and cultural divides, and enable them to influence broader societal change. While we work to render microfinance services as efficient and streamlined as possible—increasingly via digital technology from afar—how can we also maintain this invaluable opportunity for connection and collaboration? Without overburdening financial institutions, how can the inclusive finance sector build in mechanisms for this kind of exchange at the grassroots level and ensure that the network effect of microfinance can increasingly provide a platform for addressing other pressing challenges, like climate change and persistent social inequalities?

As the inclusive finance sector matures, we are seeing more organisations seeking to add value for clients and their communities through initiatives and alliances that link women’s financial inclusion with other vital services. Counts describes for example how GrameenPhone piggybacked on the extensive network of trusting relationships between Grameen Bank and its clients to roll out an airtime rental business to poor women across Bangladesh, thereby offering a lucrative microenterprise opportunity as well as critical connectivity for poor villages; such a network would have been virtually impossible to build from scratch. By the same token, Grameen Shakti and others around the world are now leveraging networks of microfinance clients in villages that still lack electricity to make solar panel investments accessible and affordable—allowing millions to skip straight to clean energy while improving their daily life, productivity and educational prospects. It is inspiring to see the finalists for the European Microfinance Award in women’s financial inclusion also demonstrating the viability, business value and social impact of linkages to services such as health insurance, business training and domestic violence prevention, among others.

Photo: Myka with a Musoni women’s group in Kenya

Myka Reinsch Sinclair is an Independent Consultant in the inclusive finance sector. She has two decades of experience in economic development and inclusive finance with a focus on women, youth and smallholder farmers in Africa, Asia and Latin America. Myka spent six years at Freedom from Hunger (now part of Grameen Foundation), where she worked closely with microfinance institutions to implement Credit with Education and led a Gates-funded initiative to design innovations to address the health-related needs and defaults of women microfinance clients. She has also worked in inner-city economic development finance in the US. Her leadership roles have included CEO of Ayani Inclusive Financial Sector Consultants, Vice President of Programs at Freedom from Hunger, and Content Director for ADA’s 2019 edition of African Microfinance Week. Myka’s current initiative, the Teranga Tribune, is a multi-media magazine focused on inspiring and raising global citizens. Myka has served on the board of the Center for Agriculture and Rural Development (CARD MRI) Development Institute in the Philippines since 2011. She has been a member of e-MFP and collaborated with e-MFP’s Youth Financial Inclusion Action Group to co-author the publication Youth Financial Inclusion: Promising Examples for Achieving Youth Economic Empowerment.