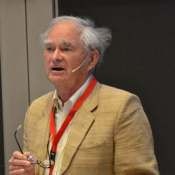 Malcolm Harper was educated at Oxford, Harvard and Nairobi. He first worked in marketing in England, and then taught at the University of Nairobi. He was Professor of Enterprise Development at Cranfield School of Management, and since 1995 he has worked independently, mainly in India. He has published extensively on enterprise development, micro-finance and livelihoods, and on child protection issues.

He was Chairman of Basix Finance in India for ten years, and is Chairman of M-CRIL, the international microfinance and social rating company. He is chair, trustee and board member of a number of institutions in the United Kingdom, the Netherlands, the USA and India, and has worked on poverty issues in Bangladesh and Pakistan, and in North, East, Southern and West Africa, Latin America and the Caribbean, the Middle East and Gulf area, South and South East Asia and China, and in the United Kingdom.