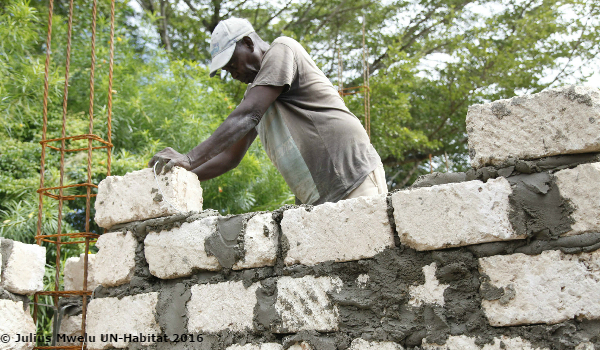 How often have you seen the two concepts appear together? If you think rarely – you’re not alone. Housing finance is that mysterious niche that crops up from time to time, but rarely makes headlines in our sector. And that’s both a conundrum and a shame.

Housing is a core human need and a top investment priority for families anywhere. Whether rich or poor, housing is often the single largest capital investment these families will ever make, that is to say, it cries out for effective products to help finance it. Unsurprisingly, housing finance is a core of financial services in wealthy nations. Indeed, if you’re over 40, chances are that a home mortgage is the single largest loan that you, dear reader, ever held. And yet in the financial inclusion and microfinance sector, housing gets notoriously short shrift. Habitat for Humanity, the world’s leading NGO dedicated to housing, estimates that while 1.2 billion people need improved shelter, just 2% of microfinance portfolios are dedicated to housing.

Why the seeming discrepancy? A big reason hearkens back to the roots of microfinance and its focus on funding microenterprise development. Although many in the sector have moved beyond this relatively narrow niche and now speak of financial inclusion more broadly, housing continues to languish in the “household spending” category. Within the traditional view of microfinance, it’s not income generating, so it’s somehow less deserving.

Second, well-intentioned practitioners diving into housing finance often find the path more challenging than expected. Housing demands larger loans, at longer terms, and at lower interest rates than the typical microenterprise loans. It requires specially-trained staff. And on top of that, financing housing requires dealing with land titles, building assessments, and many other issues in which MFIs have little expertise.

Meanwhile, for many funders and investors, thinking about housing finance brings bad memories. After all, just two short years separated the announcement of Mohammed Yunus’ Nobel and the collapse of Lehman Brothers. Investors around the world were fleeing housing just as microfinance was taking off.

However, the times are a-changin’. The 2007 housing crash in the US (and Spain, Ireland, and elsewhere) is now a full decade behind us. Meanwhile, the rapid growth in traditional microfinance has been slowing, and many major markets – including Peru, Cambodia, and elsewhere – have been slowing. The type of rapid expansion seen back in 2007 is a rarity, and often avoided by practitioners and investors alike.

Housing finance presents an opportunity to branch out not only into new lending, but to reach new clients. The opportunities for growth in this new segment, still largely unserved, are real. And opportunities for creating social value are just as real, with investments in housing generating not only stability and comfort for families, but also better health and improved standards of living.

The methodologies to extend housing microfinance to traditional MFI clients has been honed over decades of practice, going back to at least the 1980s. And more recent efforts to extend micro-mortgages to families on the next rung of the income ladder – the bottom of developing countries’ middle class – are now also in their second decade of practice. Both approaches have been shown to be financially self-sustainable and viable over the long term. What’s missing is the institutional focus needed to put housing as an intrinsic part of the mission of financial inclusion, and not just a side-benefit offered to a handful of MFI customers.

On the investment side, even as funding in financial inclusion grew to $34 billion, according to the 2016 CGAP funder survey, there has been surprisingly little innovation by funders to provide the type of long-term, reasonably priced capital needed to bring housing finance up to a scale that can make a meaningful difference to the world’s poor. Out of the more than 100 active microfinance investment vehicles, just one – MicroBuild – is specifically devoted to housing finance.

With effort and focus, much more can be done. If 20% of the crossborder funding currently deployed towards financial inclusion were to be steadily steered towards housing, it would have a meaningful impact in the housing needs for some 100 million people. The scale of such an undertaking would also have large knock-on effects, from greater emphasis on the legal foundations needed for healthy housing markets, such as stronger property rights and land registries, to large-scale changes in building practices, including improved energy efficiency and disaster resilience. And finally, such housing investment would likely have large positive impacts on local economic growth.

These are impacts that are worth working towards. That is why we at e-MFP are making 2017 the Year of Housing. In addition to the European Microfinance Award on “Microfinance for Housing” launching in April, we’ll be featuring additional events and publications on the topic throughout the year.

Will you join us?