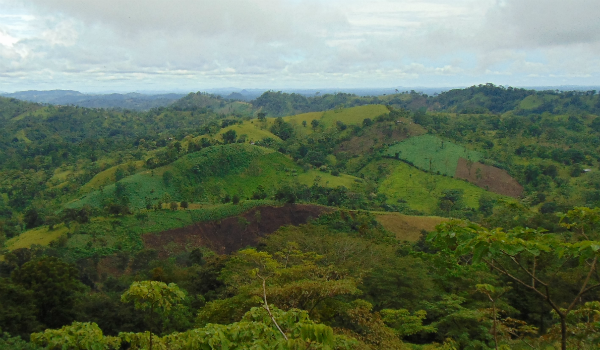 Over the last decade, one of the key rising topics in microfinance has been the sector’s response to environmental challenges, and this will continue to take centre stage. In the recently released Financial Inclusion Compass 2019, ‘Climate Change Adaptation and Mitigation’ is only second to Agri-finance in the New Areas of Focus Index, which asks respondents across the sector to look 5-10 years ahead. In recognition of these rising environmental concerns, the European Microfinance Award 2019 sought to highlight outstanding innovations in Strengthening Resilience to Climate Change. The last press release of European Microfinance Week, and the keynote address from the Award ceremony also called for urgent action on climate change. In this blogpost, we reflect on this timely call for action and question how transformative the financial inclusion sector is when it comes to responding to climate change. We do this on the basis of our past research on this topic and build on some of the messages put forward during the European Microfinance Award 2019 Ceremony.

What type of action?

The profound urgency of the climate crisis begs serious thought about the spending of climate-related international donor and investment funds. We absolutely agree with Dr. Hoyer, President of the European Investment Bank in his introduction to the Award Ceremony that climate change “is an existential threat for many nations and communities” and that “(h)ow we combat [this] and adapt will shape our future.” We also believe however that, in line with the widely shared consensus in the Transformation to Sustainability literature, such action requires profound structural transformation, and not business as usual with some green corrections. In this sense, we argue that, for finance to be a meaningful lever of change, it should be used to sponsor transformative pathways out of the upcoming climate crisis, rather than focusing mainly on valuable but ultimately insufficient band-aids to help some adapt to the worst of its consequences. Rural and agricultural MFIs in particular could play an important role in the transformation and restoration of the socially distorted and ecologically disastrous agricultural model.

We find support for this line of argument in the strong keynote speech delivered at the award ceremony by the Indian scholar and environmental activist, Sunita Narain. It was a passionate call for urgent efforts to address climate change: Climate change is real and is now widely accepted as a fact, but few people seem to understand what it actually means. It is not a gradual linear change with increasing consequences, but rather a catastrophic and abrupt deterioration that will affect everyone on the planet, especially once we irreversibly cross critical tipping-points. She stressed that we must not cultivate the illusion of merely adapting to climate change, but must act quickly towards a paradigmatic transformation of our current destructive, unsustainable productive activities and lifestyles. Narain argued that those who risk being affected first, and most (the poor in the global South – especially rural workers and farmers) paradoxically also hold a key to restoration. The activation and strengthening of their diversified farming systems could indeed contribute to capture millions of tons of carbon, through capture by reforestation and rejuvenated soils, while also transforming socially unsustainable rural societies towards increased equity and livelihood security.

This argument of what type of action is required to address pressing issues of climate change also extends to the interpretation of what it means to ‘strengthen resilience’ to climate change – the choices that are made and the actions taken. At the moment, it seems that many of the microfinance-related initiatives that pursue this goal of strengthening resilience predominantly focus on adaptation, damage control and technical responses, rather than more proactively engaging with a structural transformation of productive and consumer frameworks. This was also partly reflected in the finalists of the European Microfinance Award.

The insurance company APA-Kenya presented an index-based crop and livestock insurance of the insurance company (sharing the climate risk). ASKI-Philippines provides an articulated package of disaster-related services to increase client preparedness and post-disaster resilience, in particular related to the ever more frequent and severe typhoons. The third finalist was our Nicaraguan academic partner institution Fondo de Desarrollo Local (FDL)/Nitlapan-UCA. They presented their ‘green microfinance plus’ strategy, which combines the provision of financial and non-financial services to smallholders to support mitigation and adaptation in coffee and cattle regions.

In the end, the High Jury awarded the first place to the innovative index-based crop and livestock insurance initiative of APA which addresses the consequences of extreme weather events and pests. In itself, this initiative certainly constitutes a valuable financial instrument that can soften the impact of climate events on vulnerable small farmers in regions such as drought-prone North Kenya. We do not question the quality of the winners’ initiative as a financial instrument per se, nor do we want to downplay the lived and pressing concerns that their micro-insurance products aim to address. Nevertheless, and in light of our concerns about the more systemic and transformative way in which pressing social-environmental concerns should be addressed, we question the possible message sent out by selecting APA as the winner for ‘Strengthening Resilience to Climate change’. Does micro-insurance by itself point in the direction of the structural changes required by the current climate emergency? We would rather argue that such a financial instrument falls short of the type of action that is most needed, building resilience paying attention to mitigating vulnerabilities in a more systemic way.

Lessons from the past

The current predominance of technical and reactive measures to strengthen resilience to climate change matches well with the dominant agenda of financial inclusion, focused on bringing the financially excluded into the realm of the global financial system. In this sense, the way in which environmental considerations are taken into account appears to be in line with the current reduced social ambitions of financial inclusion, i.e. to help the poor to manage their vulnerability rather than to strive for the initial (and now largely discredited) promise to eradicate poverty, a promise which prompted the international donor community to invest billions of dollars in the creation of the microfinance industry. We – and the planet – cannot afford a repetition of this experience.

The reason why we endorsed the candidature of FDL/Nitlapan UCA was because we believe it presented an initiative which moves more directly in the direction of transformative peasant-based on-farm reforestation and soil restoration, with the intention to address broader processes of social and economic exclusion. In their application, they presented their historical efforts to support and strengthen peasant production systems through an integrated Microfinance Plus package (including credit, technical assistance, and payments for improvements in ecosystem services). This approach is 80% self-financed from profits and partially subsidised by development assistance and innovative Payments for Ecosystem Services programs such as Proyecto CAMBio. For the Award, FDL argued that its support for diversified peasant-based production systems contributed to both the resilience of the clients and the ecosystems, i.e. to the restoration of local ecosystems through agroforestry and forest-pasture cattle systems, and to the mitigation of planetary GHG-emissions by putting carbon back in soils and trees, as well as contributing to local biodiversity.

As they recognize themselves, the initiatives of FDL/Nitlapan UCA are neither perfect nor fully effective. But we believe that this emerging Green Microfinance Plus approach can inspire a more ambitious contribution to the required ‘paradigmatic’ transformation and human-nature restoration. It is this belief that underlies our motivation to submit this blog: we wish to draw attention to what FDL’s approach offers in terms of the urgent action needed on climate change by the broader microfinance sector.

As we have discussed in previous research about FDL’s initiatives, microfinance alone cannot and should not pretend to make the difference by itself. Indeed, ‘microfinance narcissism’ needs to be overcome in order to combine finance with additional services and resources. These could include, for example, educational, technical, business, legal issues, as well as targeted subsidies and payments for ecosystem services, enabled and sustained by sufficiently broad political coalitions and partnerships engaging in a real and co-created transformation of (agricultural) production and a restoration of nature. Here also lies a crucial key to remedying microfinance’s historical deficit in terms of outreach to the agricultural sector – a precondition for the sector to play a significant role in the urgent transformative action needed for the climate.

Through our ongoing Truepath research project we are trying to achieve progress in articulating and strengthening actor-coalitions, linked to FDL/Nitlapan-UCA’s financial and non-financial service delivery, with the intent to really contribute to a transformation of the destructive development pathways in the Nicaraguan Agrarian Frontier. Currently, this region is characterised by intense deforestation and encroachment of indigenous territories by extensive cattle ranching, while also being the target area of a new international REDD+ initiative. Similar initiatives should be researched elsewhere in order to generate experience and knowledge for the scaling-up and scaling-out of more transformative microfinance.

No more “business as usual”

We hope that this post can inspire further action and reflection on the role that microfinance can and should play in light of this urgent action needed, with important considerations for social and environmental justice. We hope that the microfinance industry chooses to participate in the urgently needed transformative partnerships and finds ways to mobilise its own as well as additional, complementary funds and networks in order to make a more ambitious and transformative contribution. In the face of the emergency, we hope that it does not solely focus on financial opportunities but looks for ways to contribute to the structural changes that are needed. Merely seeking to make the climate disaster more manageable will not be enough.

As academics of the University of Antwerp, we have been partnering with the Fondo de Desarrollo Local/Nitlapan-UCA group (in particular with the research division of Nitlapan-UCA) to investigate the opportunities and pitfalls of FDL and microfinance in the transformation to social and environmental sustainability.  As independent researchers we do not speak for the FDL/Nitlapan-UCA. Frédéric Huybrechs was part of the Selection Committee of the European Microfinance Award 2019. All Selection Committee members sign a Conflict of Interest and Confidentiality Declaration when they join the Selection Committee.  If a member has a conflict of interest with an institution, s/he is recused from evaluating, voting or speaking on it.

Johan Bastiaensen is professor and Chair of the Institute of Development Policy (IOB), University of Antwerp, Belgium and associate researcher at the Instituto Nitlapan, Universidad Centroamericana (UCA), Managua, Nicaragua. His main research interest lies with the transformative role of microfinance for a more socially inclusive and environmentally less destructive rural-agricultural development. This research is inspired by critical institutional theory. Much of the applied research is related to the policy debates in the context of the Fondo de Desarrollo Local (FDL).

Frédéric Huybrechs is a post-doc researcher at the Institute of Development Policy (IOB), University of Antwerp, Belgium. He currently studies the role of microfinance in the advancement of the cattle-driven agricultural frontier in Nicaragua. In his PhD thesis, he analysed the topic of Green Microfinance from a political ecology perspective and in the context of rural development. He is also a member of the action group "Green Inclusive and Climate Smart Finance" of the European Microfinance Platform.

There are contradictions, misinformation about ther term Microfinance since the CGAP phased out the last century populist idea and replavced it with financial incliusion (2015-2016). ” https://www.linkedin.com/pulse/buzzwords-m-yunus-acquiescent-interview-ascanio-graziosi/.

Should we conctinue using the term or define once for all vision, objectives, means?  You may go tjrough

THE THEORY OF CHANGE APPLIED TO FINANCE FOR DEVELOPMENT http://reader.ilmiolibro.kataweb.it/v/1252660/the-theory-of-change-applied-to-finance-for-development_1268103