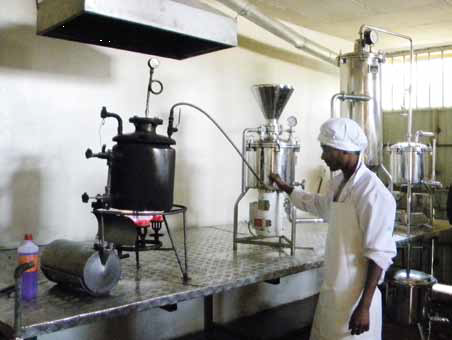 In 2010, the theme of the Award was Value Chain Finance, focusing on stimulating and promoting inclusive financial schemes that contribute to the evolution of value chains in developing countries. A value chain is a vertical alliance between different independent enterprises, collaborating to achieve a more rewarding position in the market.

Harbu of Ethiopia won for its initiative to finance the soy bean value chain as a response to market demand generated by a shortage of cow milk in Jimma city, in Oromia state. The initiative sought to strengthen horizontal linkages with farmer marketing organisations and vertical linkages with retailers and women's associations that are processing and producing soy milk. The initiative created market opportunities for producer-farmers and employment opportunities for urban women and youth. At the same time, it improved families’ nutrition, especially for children and women. Harbu provided financial services to most of the actors across the value chain, from the individual producers all the way to retailers.

Harbu: In 2015, the soy milk value chain project was fully handed over to Jimma Kera Women Association, the members of which now run the business. They have a business management team comprising five members who are accountable for the overall management and administration of the project. This includes the managing of the milk processing enterprise and, on top of this, the women’s capacity has grown with the expansion of their individual micro and small businesses. This growth has meant that they can take larger (and more useful) working capital loans than in the earlier stages of the project. 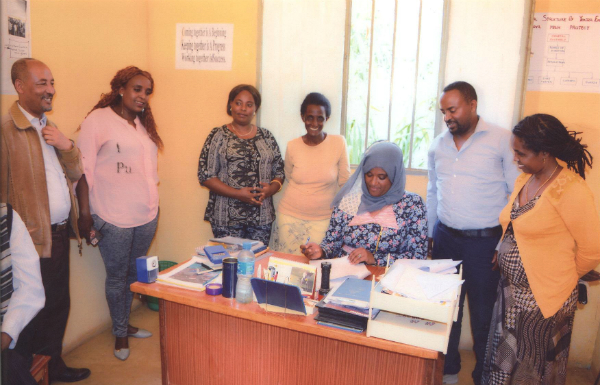 The women also continue to collect the raw materials (soya beans) they use for processing the final output from the Farmers Marketing Organization (FMO) as usual. Even while supply is limited, soya bean demand is increasing – from large cafes, bakers, and factories that are using it. The FMO is becoming more productive in response to this, and larger scale soya bean producers are being linked to larger factories like FAFA- the biggest food processing body in Ethiopia.

Despite the shortage of soya bean grain, the women have also started processing too, meaning they are currently able to produce milk powder in addition to liquid soy milk as a new product line.

e-MFP: What did winning the Award mean to your organisation? Did anything change as a result of winning, both within the specific initiative for which you won and in the organisation more broadly?

With respect to innovation and the respective value chain trajectory, Harbu continues to have a leading position and financing role within the various value chains. Harbu has been included in the Malt Barley Value Chain Program currently promoted by global NGO ICCO Cooperation and funded by MasterCard Foundation to reach 200,000 family farms in four countries within five years timeframe. Harbu’s individual target is 9780 family farms over the course of the program, and it has currently reached 4904 family farms at the three-year mark.

The Malt Barley value chain also includes a new initiative with Boortmalt Inc., one of the biggest malting plants in Europe, currently constructing a big malt plant in Ethiopia with capacity of over 60,000 tons of malt per annum. Because of Harbu’s experience in the malt barley value chain, BoortMalt Ethiopia invited Harbu to work with them. Over the 2019 planting seasons, Harbu plans to reach 2,000 smallholder farmers under this relationship, via the opening of a new branch office in the North East of the country.

Finally, Harbu’s value chain interventions are not limited to soya bean milk and malt barley alone, but honey too. The Honey Value Chain initiative is under the Food Security & Rural Entrepreneurship (FSRE) program, involving Oxfam GB as promoter, the farmers as honey producers, various local cooperatives as processors, and Harbu as financer. Within this honey program, Harbu has been able to finance 950 family farms under its two rural branch offices.

Harbu: Yes, Harbu has shared its rich experience with organisations in Rwanda, and Tanzania as well as various local development organisations. Several of these parties have adopted Harbu’s know-how and begun replicating the same initiative.

Harbu: Using the same milk producing raw materials (soya bean), Harbu plans to enable women to diversify the product lines. This means, among other things, expanding the powdered milk processing activities and supplying powdered milk as raw material for bakeries, cafes and snack makers that have such high demand for this product.

From the farmers’ perspective, Harbu has a plan to facilitate the soybean cleaning and packaging process that helps the FMO deliver sub-processed grains to certain end users such as factories and processors. This enhances the income of the FMOs by adding value to the soya bean grains.

Thank you for this article. ... I know Harbu MFI very well. It has increasingkly become one of the most innovative institution often providing demand-driven integrated services. During our assessment of its programmes supported by ICCO-STARS initiatives (a year or so ago), small-holder farmers demonstrated their appreciation of such intergated sevices (especially improved malt seed varietes integrated with financial services), leading them to a better livelihoods. Though Harbu is not one of the largest MFIs in Ethiopia (in terms of client number), we hope that its innovative initiatives would be replicated and scaled up by other MFIs, including by the largest ...