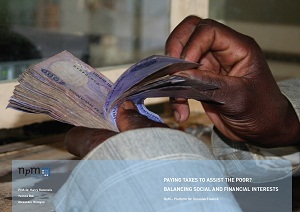 NpM, Platform for Inclusive Finance is a Dutch membership organisation focusing on the promotion of inclusive finance. What the member organisations have in common is their contribution to assisting the poor in getting access to finance.

The report Paying Taxes to Assist the Poor? Balancing Social and Financial Interest is a result of dialogue among members of NpM and presents the joint vision of all members on microfinance and taxation. It was published as an answer to questions raised in the Dutch society and parliament regarding tax structures and microfinance.

Taxing as a worldwide challenge

The issue of tax avoidance has emerged as a global issue that affects both developed and developing countries alike. At present it is widely covered by the international press, addressed by supranational bodies like the OECD and UN, and given priority by the leaders of the G8 and G20 nations. A majority seems to purport that concerted action is needed to ensure fair tax outcomes in a world that is characterized by financial interconnectedness.

Tax treaties are important instruments to regulate distributive tax issues. They have to prevent that taxpayers are confronted with double taxation and the Internal Revenue Departments of treaty partners with double non-taxation. The discussion primarily focuses on tax planning by multinational enterprises (MNEs) investing in developed and emerging economies. By making use of tax treaties between nation states and shifting profits from one country to another, MNEs can reduce their effective tax rates considerably and avoid paying taxes. In essence, there is nothing wrong if a company aims to optimise its tax position – for instance by avoiding double taxation – while overall still paying its fair share. A discussion emerges however when companies make use of tax treaties to avoid paying taxes. This issue of double non-taxation is even enhanced if MNEs use brass plate or letterbox companies for the sole purpose of avoiding taxation.

The NpM stand towards tax practice in microfinance

The main finding of the dialogue is that NpM members have agreed that they should, in principle, invest in the country where the activities take place. Second, NpM and its members hold that there is no justification for profit shifting or the deliberate structuring of companies – including the use of Special Purpose Vehicles (SPVs) – with the sole purpose to avoid taxation. Nevertheless, NpM acknowledges that investors may have sound reasons for investing in developing countries through SPVs set up in jurisdictions that are particularly apt for attracting and transferring capital to microfinance entities in developing countries.

NpM distinguishes between two types of recommendations: those that apply to its members and those aimed at microfinance investors in general.

Generally speaking, NpM urges its members to accept a leadership role by expressing that:

In addition, members adopting a leadership role will stimulate the microfinance institutions – including microfinance holding companies – in which they invest to do the same and adhere to the principles above.

NpM calls on all microfinance investors:

NpM calls upon governments and multilateral organisations to continue their concerted efforts to stimulate an open and critical discussion on the development and implementation of a globally applicable legal and moral framework for fairness in taxation. To that extent, the requirements mentioned in the paper could provide relevant guidance.

The report has also been shared with Her Majesty Queen Maxima of The Netherlands, the Dutch minister of Foreign Affairs Liliane Ploumen, CGAP, UNPRI and Tax Justice.

The full report including case studies can be found and downloaded here.