I’ve been poring over the data collected by the Angelucci, Karlan & Zinman study of Compartamos clients.  To recap from my previous blog, with an average monthly loan payment of 2,100 for the loans in the study (and for Mexican MFIs generally), the figure of 1,572 pesos as the average client income poses a seemingly impossible debt-to-income ratio of 130%.

The immediate question is whether the income figure is reliable. It does seem extremely low, putting the clients below the 3rd income percentile in the country.  Can we get anything more from that data?

Here’s the breakdown of the summary data (using the full panel dataset, i.e. households for whom both the baseline and endline surveys are available):

At first glance, the data seems even more problematic – the median income per adult is well below the average, at 1,200 pesos/month, meaning that half the clients make even less than that.  Our already impossible debt-to-income ratio has now grown to exceed 175% for half of the clients.  However, at the household level, total income (which includes job earnings, business activities, remittances and government payments), things don’t look quite so dire – a median of slightly over 4000 / month, or just over 50% ratio.  Seems more reasonable, though many (including myself) would view even that ratio as excessive.  And for the bottom quartile that earns 2000/month, the ratio remains still very much impossible. Might these incomes be understated?

Well, looking at expenses, median food consumption is 750.  So the loan payment is nearly three times higher than that.  Indeed, loan payment is some 80% higher than the combined expenses for food & other nondurable items (large costs, such as transport, utilities, and housing aren’t included in the dataset).  So in principle, the loans look somewhat plausible at the household level. But that’s for one loan – if we accept that many households have 2, 3 or more loans, then the ratio breaks down completely.  None of the above figures can support debt repayments above 4200, let alone 6300/month, unless it’s the wealthier households that are borrowing more.

As it happens, the survey did capture some information on borrowing, both with Compartamos and with other lenders: 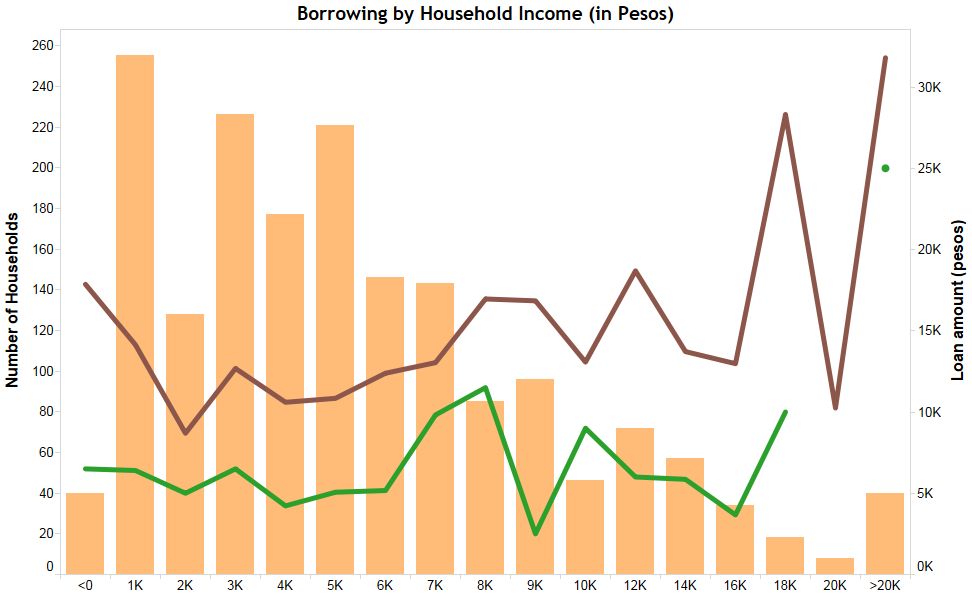 Indeed, one can see that borrowing tends to increase together with household incomes.  A household earning 8000/month has formal loans totaling nearly 17,000.  Then again, we still see plenty of impossible-seeming figures, such as households earning 1000-2000/month carrying debt at over 8,000.  We don’t know the repayment figures with these loans, but we do know them for Compartamos, and for these households, the 5,000-peso loans feature a repayment amount of 1600/month – their entire monthly income.

That there is a substantial under-reporting of incomes in this survey is inescapable. A substantial number of households (17%) report incomes below 1000 pesos, while showing debt well above average. Some households have business activities that push their incomes into negative territory altogether. It's difficult to conceive that so large a share of borrowers are living on incomes that place them below the 1st income percentile in the country, while borrowing more than households making several times more. Certainly, some of these borrowers may well be struggling financially, but really, no credit bubble can be sustained with so large a number of households so deep in debt that they their repayment requirements literally exceed all of their income. Were that really the case, we would have long ago been hearing of daily tragedies, and seeing a great deal of resentment among borrowers. At least on the the surface, there is not a large number of borrowers in Mexico showing such signs of stress.

This survey is among the most detailed recent assessments of the incomes of Mexican microfinance borrowers, yet the numbers still don’t add up.  Most microfinance clients continue to be repaying their loans.  The question remains – with what?

Thanks Daniel, one think to think about in this analysis or in your "with what?" question may be that the multiple borrowing takes place as a result of the high DTI rather than the cause. So people are repaying loans with the proceeds from other loans and that they are timed slightly differently.  What this suggests is that when the music stops, it could become an issue.  I agree that it may be impossible to have these very tiny incomes, but have a hypothesis that you could consider. Many village bank members bring adult children into the group to "complete" the group. I would guess as much as 1-2 people in each group might be adult kids or perhaps non-working siblings of a borrower who has surpassed the limit of the village bank's capacity but wants to borrow more.  As such, those "borrowers" are not actually using the money but channels for the larger business in the group.  They may be students, housewives, etc. the HH income number should capture this but perhaps because they feign independence from the main borrower, it doesn't fully.

Thanks Barbara. Excellent point, and this has been my contention from pretty much the start of this blog series. However, I'm now beginning to think that this cannot be the whole picture. The problem is that with gaps this wide and interest rates so high, the process of such cyclical borrowing (loan from lender B to repay lender A) spirals out of control very quickly. These are mostly 4-month loans, after all. The rising write-offs in the sector may be a reflection of clients hitting the wall, but the trend is too slow. I can imagine maybe some 10% of clients falling into this trap, but certainly nothing like 25% or more, which is what this data would imply.

On adult children -- definitely. I suspect that borrowing on behalf of others' is a major part of the reason. However, the cashflow must come from outside the household, otherwise we have the same problem (the IPA study included income from all sources, including working spouses, etc.).  I do wonder how big a proportion this really is -- it could well account for much of the apparent gap.  However, as such downstream borrowing grows, you get the problem of hidden risk, with the MFI basically having no idea where the money comes from and how sustainable those repayments might be. And all that is multiplied by the high levels of multiple borrowing...

Daniel, you are on the right path when you ask yourself where the money (to repay loans) is coming from: