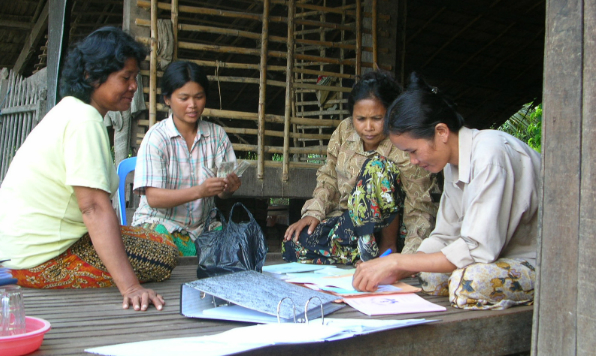 Since 2016, the 95-member Cambodia Microfinance Association (CMA), Incofin, MIMOSA, the Credit Bureau of Cambodia, and several other stakeholders have been developing the CMA Lending Guidelines, under which microfinance institutions (MFIs) are working together to prevent over-indebtedness in Cambodia. The project is funded by Incofin, PROPARCO, BIO, FMO and ADA.

MicroCapital: How long have you been concerned about possible overheating in the Cambodian microfinance market?

Kea Borann: Concerns of the market overheating started at least as early as 2015. Since then, the total outstanding portfolio of the industry has been growing at an average of 25 percent per year, even as the number of loans has remained unchanged at 2.3 million. This seems to mean that the same clients are taking on more debt when their loans are renewed. The average loan size grew from USD 1,691 to USD 3,003.

Dina Pons: This phenomenon is coupled with another: While most loans had a tenor of 12 to 24 months in the past, we now see loan maturity as high as four or even five years.

MC: What metrics do the Lending Guidelines measure?

Daniel Rozas: It’s a mix of traditional indicators for measuring over-indebtedness, such as multiple borrowing and loan-to-income ratios, but we’ve also added metrics for measuring loan refinancing, that is to say taking out new (and usually larger) loans to refinance existing loans that have not yet matured.

MC: What obstacles did you overcome to bring the partners together?

DP: The first obstacle is related to differences of opinion on risk levels. Contrary to overheating microfinance markets in other parts of the world, Cambodia does not have high levels of multiple borrowing. Instead, it has a fast increase of average loan size vs GDP per capita. This is coupled with a noticeable increase of loan tenor.

Meanwhile, self-regulatory measures are very hard to implement because they are based on willingness to comply. While many MFIs understand the value of the Lending Guidelines, some fear that non-endorsing competitors will take advantage of the situation to grab market share in pursuit of short-term profits.

MC: How are MFIs adjusting their processes to stay within the guidelines?

KB: MFIs that have endorsed the Lending Guidelines are adapting their credit underwriting policies and enhancing their risk management practices. They are also putting more emphasis on helping their staff communicate better with clients about the risks of taking on too much debt, especially with longer tenors. In support of this, CMA has pro­duced a range of educational videos and press releases. The association has also has done a lot of advocacy with industry stakeholders to build their support for the Lending Guidelines.

MC: What is the reaction from investors and regulators?

DP: Both the National Bank of Cambodia (NBC) and the investor community – more than 24 microfinance investment vehicles and development finance institutions – have been very supportive of this initiative. When the Lending Guidelines were formally unveiled in December 2016, NBC and several lenders made public statements calling on MFIs to adopt them.

Today, the Credit Bureau of Cambodia issues each MFI a monthly “dashboard” that shows its level of compliance with the key metrics of the Lending Guidelines. These dashboards are sent to NBC, and they are also used by a growing number of investors when conducting monitoring visits and discussing funding rollovers and increases.

MC: What are the next steps?

DR: In the near term, we’re focused on tightening monitoring to minimize the room for MFIs to “game” the system through practices that meet the technical requirements of the metrics, even as they violate the spirit of the Lending Guidelines. This is an inevitable part of performance metrics; whichever way you define them, clever individuals will try to find a way around them. In the longer term, we expect to expand the Lending Guidelines to cover other relevant lending practices, as well as bring outside parties – including commercial banks – into the framework. We also hope that NBC can play a more proactive role in helping “call out” financial services providers that are flouting the Lending Guidelines and putting clients at risk. This is critical to insuring that the Lending Guidelines remain a meaningful force in Cambodia over the long term.

Kea Borann is Board Chair of the Cambodia Microfinance Association and the CEO of microfinance institution AMK. Dina Pons serves as the regional director for East Asia as well as impact manager for Incofin. Daniel Rozas is the co-founder of MIMOSA and Senior Microfinance Expert at e-MFP. Representatives of all three organizations will discuss the Lending Guidelines in much greater detail at European Microfinance Week.

MicroCapital publishes information on microfinance, SME investing and other forms of impact investing monthly in the MicroCapital Monitor and daily at MicroCapital.org. Since 2005, we have been covering news, events, research summaries and a range of special features on the sector. As impact investing is an emerging industry with a legacy of charity, objective news with a business orientation is scarce.

MicroCapital seeks to counter this scarcity by providing candid information with the goal of encouraging rational growth of the industry.