Home / Blog / Microfinance Funds as catalysts for foreign private investments in emerging microfinance markets: evidence from a decade of data and analysis
12 Jan. 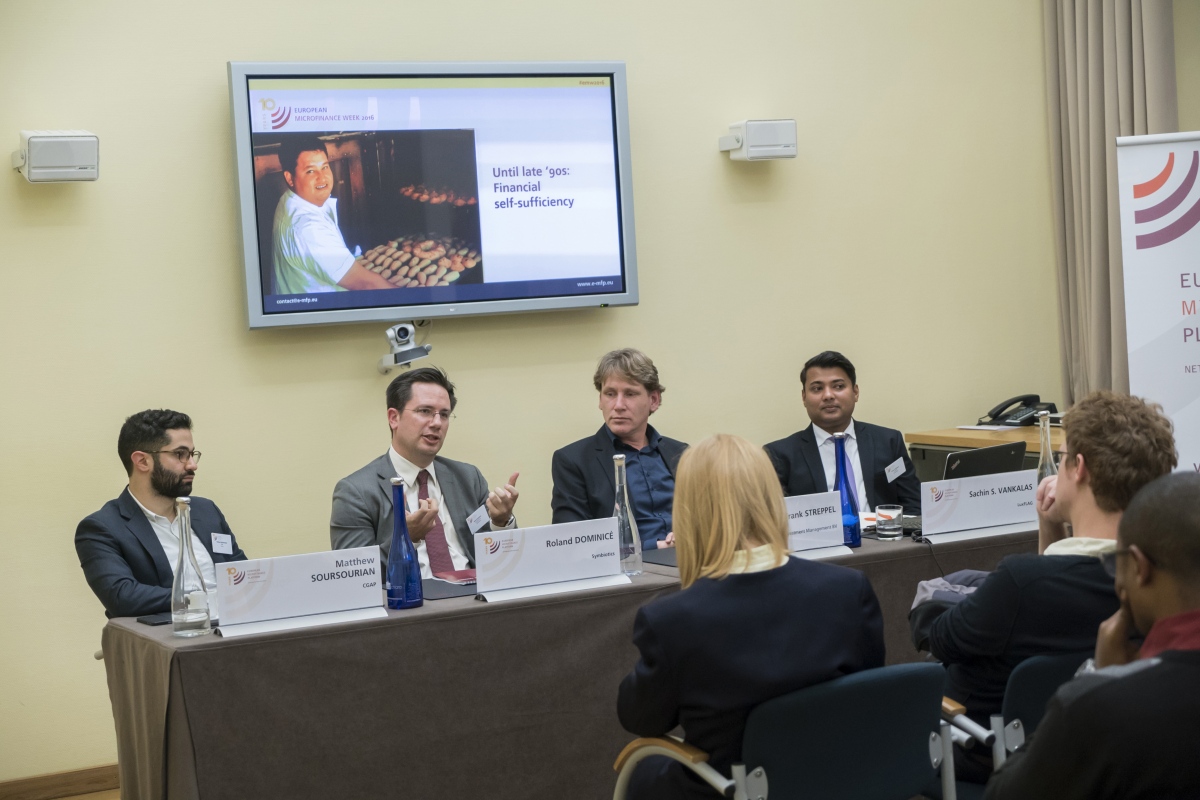 Microfinance, a lead sector within the larger impact investing spectrum[1], has gained prominence from development-minded investors over the past decades. Initially, international funding into microfinance was generated largely from donor organizations, including public development agencies and private foundations. As the market gained traction, the role of private capital grew in importance as not only a means for microfinance institutions (MFIs) to reach scale, but also to increase their social outreach beyond what was possible with donor money.

Private investors and donor agencies thus joined efforts in creating microfinance investment vehicles, better known in the industry jargon as “MIVs” or more simply “microfinance funds”. MIVs act as the main link between MFIs and the capital markets and usually provide debt financing, equity financing or a combination of both to MFIs located in emerging and frontier markets.

The Consultative Group to Assist the Poor (CGAP) began to take interest in MIVs in 2003, a time where several of these vehicles saw the light, and before the investment boom which was witnessed by the sector with the announcement of the United Nations “2005 International Year of Microcredit.” However, the industry was still lacking common definitions, terminology and performance standards. In order to bring forward improved transparency on MIVs’ financial and social performances, a first market report on microfinance funds was produced in 2007 by CGAP, in collaboration with Symbiotics. The inaugural MIV benchmarking tool was thus born - based on a market survey containing a common set of definitions and reporting standards - a landmark that set the stage for regular, annual surveys carried out every year since then.

Fast forward ten years, Symbiotics and CGAP have yet again partnered to develop a new extensive report (white paper) reflecting back on a decade of MIV operations, shedding light on their progress during the period 2006-2015. The recently released white paper co-authored by both organizations and entitled “Microfinance Funds: 10 Years of Research & Practice” carefully details major market trends.

In light of the 2016 European Microfinance Week in Luxembourg, participants got a glimpse of the new white paper’s key findings as part of the conference’s stream on “investors, donors and funders.” These results served as an anchor point for the panelists who shared their expertise on the developments of microfinance funds, identified their challenges and provided an outlook on innovation and impact, all during a session moderated by Sachin S. Vankalas from LuxFlag. The panel was composed of Roland Dominicé, CEO of Symbiotics, Matthew Soursourian, Financial Sector Analyst at CGAP, and Frank Streppel, Head of Investments at Triodos Investment Management BV.

M. Soursourian, one of the authors of the white paper, started the conference session by previewing CGAP’s annual Funder Survey results about the current level of international funding for financial inclusion – an introduction which set the stage for R. Dominicé to delve into a deeper layer of financial inclusion: microfinance off-shore investments. Some of the key findings presented by R. Dominicé revolved around the size, concentration, geography, investors, returns and social performance of MIVs over the last decade.

Overall, since 2006, the MIV industry has witnessed steady and stable growth, benefitting from capital inflows of USD 1.1 billion per year. The market size amounted to USD 11 billion at the end of 2015, up over fivefold from the initial assessment of USD 2.1 billion in 2006. The industry remains highly concentrated around large MIVs (those with assets above USD 250 million) being the drivers of growth and Fixed-Income MIVs (those investing 85% of their non-cash assets in debt instruments) being the prime strategy observable in the market. Large MIVs have a 62% market share today compared to 38% a decade ago, but they are still small in numbers though, pointing to the existence of very large vehicles, a couple of them having even reached the USD 1 billion mark. 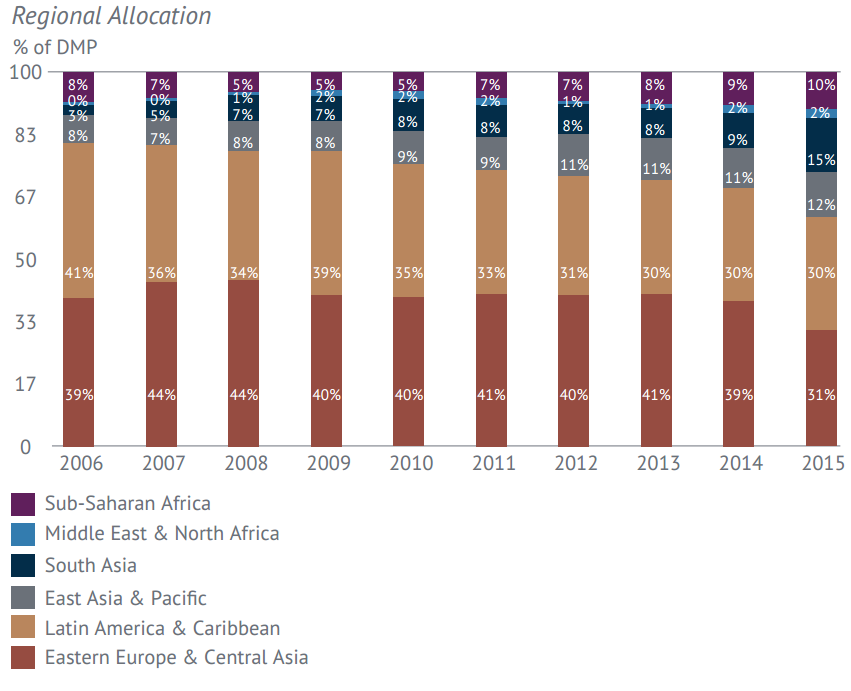 The most significant shift that has occurred in MIVs is their regional allocation. Absolute volumes towards both Eastern Europe & Central Asia (EECA), as well as Latin America & the Caribbean (LAC) remain the most important, although both regions have reduced their relative shares in terms of MIVs’ investment portfolio, one that is today more balanced across the different regions. Whereas both EECA and LAC together represented 80% of MIV investments in 2006, they represented 61% at the end of 2015, with other regions such as Asia (witnessing the largest growth), and to a lesser extent Sub-Saharan Africa benefitting from increased investments.

In terms of investor type, the white paper puts forward the importance of institutional money as a lead contributor to market growth. By the end of 2015, institutional investors (pension funds, insurance companies, banks and foundations) funded nearly 50% of MIVs’ capital, followed by retail & high-net worth investors (28%) and public funders (25%). Most importantly, the involvement of private institutional investors has grown rapidly since the first MIV benchmarking report (27% per year), a testament to the success of MIVs to crowd-in private capital.

Looking at returns and cost levels of MIVs, R. Dominicé pointed to a gradual decline of MIVs’ portfolio yields from 9% to 7% over the past couple of years, in-line with declining money market rates. With both portfolio quality and total expense ratios exhibiting a flat trend across the years (on average: under 2% loan loss provisioning and 2% total expense ratio), net return for the investors have averaged 3.3% over the past ten years for Fixed-Income MIVs. 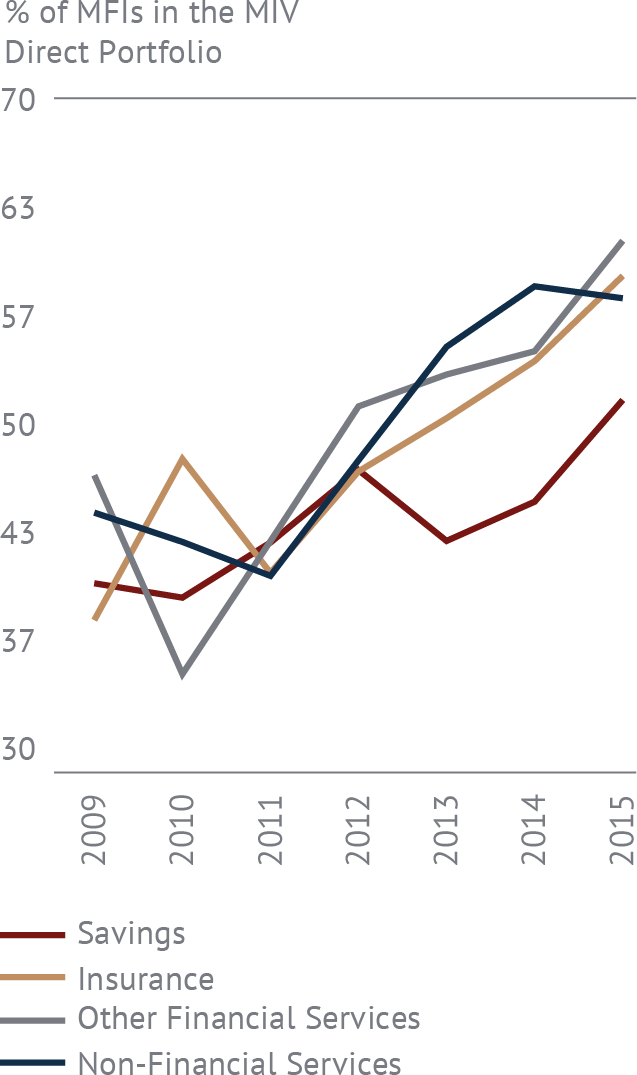 Last but not least, on to the social performance front, MIVs are showing stability and improvement. Perhaps the most impressive development is MIVs’ tally on social outreach, measured in the white paper in terms of number of end-clients reached. Continuous capital injection into microfinance by MIVs is reaching more and more active borrowers, i.e. the clients of MFIs on the ground. Back in 2008, one vehicle used to finance less than 20,000 estimated active borrowers whereas currently this figure stands at over 300,000, equivalent in absolute number to 24 million end-clients benefitting from capital market financing. Gender analysis tells us that MIVs continue to reach a largely female clientele (around 65%) and that investments are channeled equally between an urban and a rural population. The data also tells us that the average MFI financed by MIVs has evolved on its non-credit products by increasingly offering savings, payment, insurance, technology and advisory offerings.

All these figures and trend lines from the past 10 years of industry data have shown positive signals in terms of MIVs’ financial and social performances. Microfinance remains a tool to serve market segments that remain under funded and MIVs have proven with their sustainable business model that it is possible to approach financial inclusion from an investment perspective. Challenges do remain of course, both on the markets’ as well as the investors’ side. However, as discussions on solving development challenges revolve today around the role of private capital, MIVs remain at the forefront as the main catalysts for foreign private investments in emerging microfinance markets.

Ramkumar Narayanan is a Market Research Analyst at Symbiotics, where he is responsible for research related to financial institutions and markets. He has also contributed to Symbiotics’ research work on microfinance funds since 2013, taking part in the production of annual MIV surveys.Prior to Symbiotics, he worked at the World Microfinance Forum Geneva, managing a working group aimed at raising awareness of the opportunities and challenges of microfinance in China. He holds a master’s degree in Public Management and a bachelor’s degree in Business Administration from the University of Geneva.