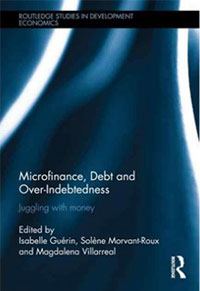 This part II of a two-post blog, summarizing some of the key findings of an edited volume that has just been released (Guérin I. Morvant-Roux S. Villarreal M. (eds) (2013) Microfinance, debt and over-indebtedness: Juggling with money, London: Routledge). More details about the book can be found here. Other project publications may be found at microfinance-in-crisis.org.

See part-one of the blog here.

In our previous post, we addressed our first two findings: 1) over-indebtedness stems not only from aggressive microcredit policies but also from global trends of financialisation, and 2) over-indebtedness should be understood as a process of economic and social impoverishment through debt that can develop in mutual contradiction. We continue our summary with two other findings that look at the issue of local decision frameworks and juggling practices, and the ambiguous role of microcredit.

Financial illiteracy is a commonly – and wrongly – attributed a cause of over-indebtedness. This stereotype reflects profound ignorance of the complexity of local financial reasoning and decision frameworks. Our case studies highlight the subtleties of budget management and debt behaviour. Over-indebtedness is caused not by financial illiteracy but rather, is shaped by, and reinforces, pre-existing inequalities in gender, caste, ethnicity and religion.

We argue that borrowers and lenders resort to specific decision frameworks – reasoning tools that are available to individuals in specific situations to appreciate risk, take financial decisions and choose among various financial tools. Decision frameworks have socio-cultural, legal and normative components and are not necessarily sophisticated or formal. They stem from social interactions and are thus embedded in individuals’ social positions, particularly in terms of class, caste, gender and ethnicity. Financial decisions serve multiple – and often conflicting – purposes, whether making ends meet, respecting social structures, positioning oneself in local social networks and hierarchies, or asserting one’s individuality.

Throughout the book, we highlight specific decision frameworks which people resort to when dealing with money and debt, along with the prevalence and sophistication of ‘juggling’ practices. To keep multiple objects in the air simultaneously, a juggler must be continuously throwing and catching, which demands not only speed and dexterity, but also risk-taking. The same is true for financial practices: people combine multiple financial tools to support ongoing borrowing, repayment and reborrowing (one borrows from one place to repay elsewhere). Individuals swap roles between debtor and creditor, and even the poorest people are also likely to be creditors.

We also find that no pure market price can reflect relative demand and supply. Financial practices are instead regulated through a web of social institutions. The terms and conditions of debt reflect micro-politics and the history of relative statuses. Debt practices are fragmented and hierarchical, as is illustrated in this book by cases in multiple geographies and contexts, be it Dalits and lower castes in India, indigenous communities in Mexico, Hispanic migrants in the United States, lower classes in Madagascar and in France, as well as women in a range of environments.

2)      Paradoxes and ambiguities of microcredit

These considerations have many implications for current microfinance practices, which have become a necessary component of the economy of the poor. On the one hand, we note the poor’s considerable capacity to appropriate finance and microfinance in a variety of sometimes surprising ways. Clients do not passively consume microcredit services, but translate and interpret them according to their own frames of reference, adjusting and adapting them, and often bypassing the rules to do so.

Diverting loans for so-called “social purposes” (i.e. non-income generating), which is discouraged by many MFIs, is the rule rather than the exception, as is recycling microloans into informal loans. This either takes the form of on-lending microcredit to others, or borrowing informal loans to repay microcredits.  Clients often decry solidarity groups, despite the fact that they are officially praised for their effectiveness in enforcing repayments and social cohesion. And yet, in some cases groups tend to replicate and reinforce rather than abolish pre-existing social hierarchies and divisions.

Manipulating and misappropriating microcredit funds is not limited to borrowers. When repayments lag in highly competitive environments, MFI staff use increasingly aggressive techniques to enforce repayments. In some cases, borrowers, who are mostly women, can become sucked into intricate spirals of debt where they have no choice but to reborrow, even if they no longer want microcredit, since this is the only way to preserve their creditworthiness.

Microfinance alone is rarely the sole cause of household over-indebtedness. However, microcredit can catalyze pre-existing imbalances and accelerate declines. Conversely, when supply matches the diversity of local needs in contexts with potential for economic development, microfinance can play a positive role, as the Malagasy case study illustrates.

Throughout the book, different cases highlight the tension at the core of the paradoxes and ambiguities of microcredit. Microcredit is a desirable form of credit for borrowers because it appears to be a way out of oppressive debt traps. It is a promise of an egalitarian relationship contracted outside local circles of social hierarchies. Unfortunately this hope for freedom often proves illusory.

The lives of the poor are precarious. Sometimes it may take only a single unexpected shock – a health emergency, a sudden loss of income, or any one of the multitude of disasters that continuously threaten the lives of families living on the edge. And with formal social protection often non-existent or ineffective, people desperately turn to protective debt, as oppressive as it might be. The terms and conditions themselves are relatively impoverishing and any substantive equality would require extricating a household from its subordinate status in a number of cross-cutting exchange relations. Such radical changes in social relations coming from outside as well as inside the economy, are beyond individual households’ control.

In other words, while microfinance may improve households’ cash flow and management, it can also lead to financial vulnerability, credit addiction and debt traps. These policies can do more harm than good, not only because of commercial aggressiveness and competition, but also because microfinance promoters lack a proper vision of local socioeconomic dynamics and financial needs.

PhD in economics (Lyon 2 University) Solene Morvant-Roux is a microfinance project leader at
Farm Foundation (www.fondation-farm.org) and Post-doctoral Research Fellow at the Institut
de Recherches pour le Développement, France. Her research interests include microfinance in
rural areas with a focus on financing agricultural activities, debt, social institutions and
migration. From a methodological perspective, her research relies on a combination of
qualitative and quantitative tools.
As a PhD candidate she lived one year in Mexico as a research fellow of the Centre d'Etudes
mexicaines et centroaméricaines (CEMCA) where she studied a microfinance institution
implemented in remote rural areas.
She also has short term field experience in different countries such as: Morocco, Togo, Guinea
and Madagascar.

Good to see the sector focussing on such an important issue.