Home / Blog / Microfinance and savings outreach: What are we measuring?
20 Mar.

For years, credit was the driving force behind microfinance. But times have changed. Instead of credit, we now speak of financial inclusion and expanding access to savings stands as one of the topmost objectives for the sector.

We also live in the age where it's no longer acceptable to claim success without reliable metrics to back it. And on that front, the metrics applied to savings are woefully inadequate. According to a paper recently published by e-MFP, 50-75% of the savings accounts reported by MFIs stand empty. Like shadows cast by an evening light, the majority of savings clients are but illusions that obscure the real savers. We are thus doubly tricked – led to believe that more clients are saving than is the case, and that the clients who save are poorer than they really are.

This is both a problem and a symptom of a larger challenge. The problem is simply that we know surprisingly little about real savings outreach. Reporting the gross number of bank accounts and total deposits, whether for a single institution or an entire market, is a poor reflection of reality. As Elizabeth Rhyne put it succinctly: "possession of a bank account ... should not be confused with genuine inclusion." Yet that assumption lies behind most of the metrics used to report savings outreach.

In 2008, the microfinance sector in Bolivia, one of the case studies in our paper, reported 1.4 million savings accounts, with an average balance of $309. Bolivia is often regarded as one of the most mature microfinance markets, and the success of its savings outreach is one of the reasons why. However, our analysis shows that after excluding empty accounts, the actual outreach drops to some 366,000 active savers, with an average balance of $1,225. Instead of reaching millions of poor savers, Bolivian MFIs are serving a substantially smaller number of individuals, many of whom probably earn more than the MFIs' traditional clients. Similar patterns show up at banks and credit unions. That's the problematic outcome of how savings outreach is currently reported. 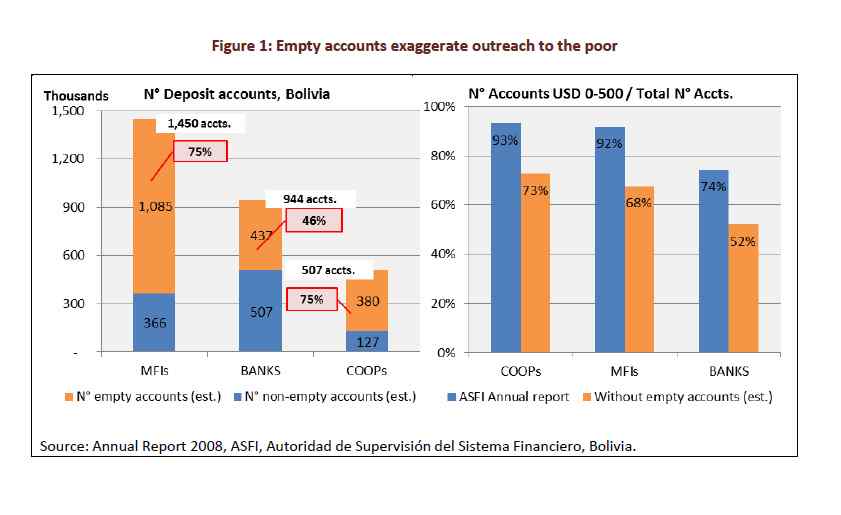 Accion recently shared findings from its affiliates that demonstrate how empty accounts reflect regional and institutional differences in microsavings. As with our findings in Bolivia and elsewhere, Accion's Latin America partners' apparently high savings outreach is a quirk of arithmetic: in half of the institutions, over 70% of accounts are dormant. This is in part because savings are considered unprofitable, while clients do not perceive MFIs as the right place to save.

However, not all savings products for the poor result in high dormancy rates.  By explicitly focusing on serving the needs of poor savers, Finamerica, Accion's partner in Colombia, rolled out a product whose dormancy rate of 33% is less than half of its traditional products. Examples of this abound elsewhere: Grameen Foundation's Microsavings Initiative at Cashpor, India achieved a dormancy rate of 28% compared to average dormancy rates of over 80% among financial institutions in India. Similarly at CARD Bank in the Philippines, the Grameen Foundation collaborated with the behavioral economists from ideas42 to increase transaction frequency by 73% and raise account balances by 37%.

These efforts suggest that an explicit focus on serving savers, as opposed to raising deposits or simply opening accounts, can have a material effect on client savings activity. At the same time, it's worth recognizing that empty or even dormant savings accounts are not necessarily a problem in itself. Clients may use accounts as a means to receive payments rather than as vehicles for saving – an important financial service in its own right. In other cases, such accounts may facilitate transactions between the institution and the client. And finally, keeping inactive accounts open may help maintain a customer relationship that could be reactivated at a later time.

All of these are useful and legitimate objectives, as are efforts to reduce dormancy rates. Yet, it is impossible to monitor such efforts by looking at the number of accounts and total deposits. All of the above projects included a deeper examination of both account activity and account balances, including separating out empty or dormant accounts. A similar approach should be applied more broadly. Reporting on savings, whether by MFIs, country associations, investors, and others should move to a new set of standards. As an initial recommendation, we suggest the following:

Such additional reporting may incur marginally higher costs and administrative burdens. However, such reporting is essential for MFIs that want to strengthen their client relationships, especially when targeting the poor or financially excluded. If we as a sector are to reach the objectives we set out for financial inclusion, we must abandon the illusory shadows of traditional savings reporting, and face the full complexity of real savings outreach.

Thank you for this important issue on saving mobilization -- OVERVIEW OF PRACTICAL CHALLENGS IN LOCAL SAVING MOBILIZATION BY ETHIOPIAN MICROFINANCE INSTITUTIONS.

This is consistent with our recent research outcome on local saving mobilization. I am fowarding the link below for the full paper (posted at CGAP/Microfinancegateway.org) but below are some of the key issues:

This case study presents some of the experiences and obstacles to successful voluntary savings mobilization in the Ethiopian Microfinance industry by analyzing the Women Entrepreneurship Development Program (WEDP). The WEDP is one of the pillar projects of the Private Enterprise Programme Ethiopia (PEPE), funded by the UK’s Department for International Development (DfID). The study suggests that if MFIs want to provide voluntary savings on a sustainable basis there are clear remaining gaps in terms of governance, institutional culture, product design, incentives, outreach as well as frontline capacity, and confidence in voluntary savings promotion which need to be addressed. Key findings include:

Since this is a 'work in progress' we would like to get your comments, feed backs, suggestion, etc. Please view the full doc from the following link: