Looking Backwards to Move Forward: What Traditional Ways of Saving in Groups Can Teach Us About Financial Inclusion

Home / Blog / Looking Backwards to Move Forward: What Traditional Ways of Saving in Groups Can Teach Us About Financial Inclusion
03 Mar.

Looking Backwards to Move Forward: What Traditional Ways of Saving in Groups Can Teach Us About Financial Inclusion

Last year the European Microfinance Award focused on “Encouraging Effective and Inclusive Savings.” Several European Microfinance Week 2020 sessions delved into various aspects of savings, including a plenary on creating an environment for effective and inclusive savings, a session on the needs of VSLAs during COVID-19, and a debate on the role of investors in encouraging savings. This blog by Jeff Ashe is another important entry in this important discussion. 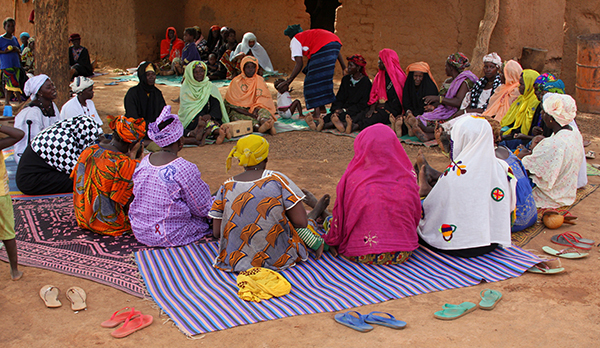 It was the summer of 2004. Mamadou Biteye[i] and I met a group of women traders at a market two hours from Bamako, Mali’s capital.  Before we made our pitch for Saving for Change, the Savings Group Initiative I directed at Oxfam America, I asked, “Are any of you saving in a tontine.” Their hands shot up. One woman said, “We save money every week and each of us in turn receives her payout.” She described in detail how she organized her tontine as the others listened intently. Another woman chimed in “We save for a year and then divide the money when most of us need it.” Another added, “We save so we can buy what we need to sell wholesale. That way we make a lot more money.” In less than an hour, they described three solutions for saving money in useful amounts adapted to their specific needs.

We listened politely, but we already had the answers.  Like most of us in the development businesses, we saw ourselves as the experts. I had spent two years evaluating Pact’s Women’s Empowerment program in Nepal, Self Help Groups in India, and Village Savings Lending Associations (VSLAs) in Zimbabwe. My team and I had spent incalculable hours poring over the operating manuals and systems and creating the Saving for Change model.  What else was there to learn?

Saving for Change in Mali was a success; 425,000 of some of the world’s poorest women were organized in into 20,000 groups by the staff of our NGO partners.[ii] Based on Mali’s success, we later replicated SfC in Senegal, Cambodia, El Salvador, and Guatemala.

Nevertheless, what those women said about their tontines at that market years earlier haunted me.  What could Saving for Change have achieved, I thought, if instead of introducing OUR model, we learned more about how THEIR informal groups worked? What if, instead of training teams of local university graduates to organize SfC groups in villages, we asked the tontine leaders how THEY would advance the expansion of quality savings circles in their villages with a focus on the poorest? They (we call them the “community geniuses”) would receive a small stipend to train more tontines in their own and neighboring communities. They would also set up committees to better channel some of the remittances sent to into these villages to fund savings circles, build local businesses, improve infrastructure, and help the destitute.

Unlike the university-trained staff, these tontine organizers (most of them women), live in the villages, speak the local language, are known and respected in their villages, and can walk, or ride on the back of a motorcycle, to travel to nearby villages to train more groups.  How they organize their tontines and ensure accountability has been honed over generations, but is constantly evolving. Tontines are incorporating VSLA concepts into their groups and using WhatsApp to keep records, all without outside support. 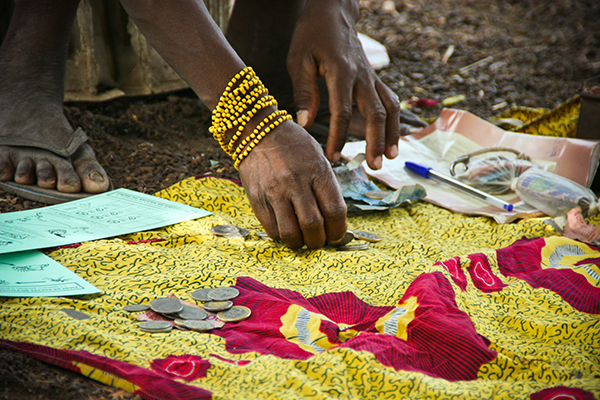 Given that millions of Mali’s twenty million inhabitants are already part of savings circles (many times the number of SfC group members,) and that many thousands (most of them women) are already organizing tontines, we would have an inexhaustible number of candidates to choose from.  And, since they lived in these villages, they could continue their work indefinitely as the groups they trained paid them for the help they received.

Instead of promoting our model, the task of the local staff would be to identify tontine organizers with the strongest groups and a passion for helping their community. Each cluster of 25 or so community geniuses who lived in the region would be responsible for approximately 100 villages. They would meet at least monthly, either virtually through their cell phones or in person, to share their experiences, and set goals for the next month, all with a focus on reaching those who were not part of a tontine or did not save at all. We would listen, ask questions, learn, and monitor and evaluate the outcomes.

The best of these “geniuses” could share what they learned with newly emerging clusters of geniuses in nearby communities. Furthermore, villagers who were leaders of Saving for Change groups could share that methodology or develop a SfC/tontine hybrid that better met their needs.  All this would require a bit of external funding, but a fraction of what it cost to train savings groups – VSLA, SILC, Saving for Change, etc.

What if a small amount of the grants that promote institutional financial inclusion – banks, MFIs and digital finance - were spent on strengthening informal financial institutions, tontines, tandas, susus, dhikutis (every country has its own name)? One hundred million dollars per year over ten years would provide 100 million of the world’s poorest a place to save and have regular access to a useful lump of money and to be part of a group that would stand by them in time of crisis, a kind of “virtual insurance” policy. Their capacity to manage their finances would be greatly enhanced without necessarily a connection to a financial institution, while reaching a population virtually untouched by institutional financial inclusion. The estimated cost would be about $10 per group member. “Proof of concept” funding could enable practitioners to test these ideas immediately.

If this sounds expensive, consider that every year billions of grant money and much more from investors is poured into MFIs, banks, and mobile money providers. MFIs, and certainly banks, do not serve the truly poor, too many of the much ballyhooed savings accounts aren’t used, and mobile money is used mostly for sending money home. Online lending is too often expensive and can push users into a cycle of debt. To be fair, these institutional strategies are often useful, but it is time to look for saving and borrowing alternatives beyond financial institutions.

Most help, whether from governments, non-profits, or foundations, assumes that resource-constrained communities are somehow deficient in their capacity to solve problems, even though these communities have survived famine, war, drought and flooding for many generations without outside support.

Grassroots Finance Action embraces the mantra, “They already have the answers, just ask.” What if practitioners stopped what they were doing for a few days, ask questions of the tontine organizers as Mamadou and I did years earlier? They would be amazed what they would learn.

[i] Mamadou Biteye was Oxfam West Africa’s Senior Program Officer at that time. He later became the West Africa Director for Oxfam Great Britain and then worked for the Rockefeller Foundation.

[ii] Ashe, Jeffrey with Kyla Neilan. “In Their Own Hands: How Savings Groups Are Revolutionizing Development.” Barrett-Koehler Publishers, San Francisco. For a free electronic copy contact me at jeffaashe@gmail.com.

Jeffrey Ashe is Chair, Grassroots Finance Action and Adjunct Associate Professor, Columbia University. Jeff was the Director of Community Finance for Oxfam America between 2004 and 2013.  He was a microcredit pioneer at Accion International, led the first study of microcredit funded by USAID (the PISCES project) and designed and evaluated peer lending MFIs in 34 countries. In the USA he launched Working Capital with operations throughout six states. Jeff started learning about savings groups in 2000 and he and his students started studying ROSCAS in 2017. https://mangotree.org/Resource/How-to-Achieve-the-American-Dream-on-an-Immigrants-Income. He teaches Finance for the World’s Poorest at Columbia University. For more information contact jeffaashe@gmail.com