First published in covid-finclusion.org - a new discussion forum and blog for the financial inclusion sector from e-MFP, CFI and SPTF

In our first piece in this series - Keeping the Patient Alive - Adapting Crisis Rubrics for a Covid World, we introduced the analogy of the emergency room doctors trying to treat a critically ill patient - a financial services provider (FSP), its staff and clients in lockdown or socially distancing, unable to travel and with incomes collapsing, health expenditures increasing, and some sick or dying. Repayments are close to impossible, and new loan applications are flat. But operational expenses continue, and it’s a race against the clock.

In short, this patient is critical. To continue the analogy, ensuring the reciprocal trust and confidence of staff and clients and investors is like treating a patient’s organs, with interventions from pharmacology to surgery to transplant. We’ll get to that, though. For now, the challenges need triage. The patient can’t breathe, so she cannot oxygenate and circulate her blood. This, to come back to our institution, is the critical need for liquidity.

We see three broad drivers of (il)liquidity. First, there is the risk of a run on deposits by savers facing income shortfalls and even panic about the institution’s holding enough to pay the savers. Second, there are the operational expenses, mandatory for the functioning of the institution, that it must pay for without repayments of principal and interest from clients. This is a significant risk, but will depend on the underlying health of the institution. If the FSP has enough cash on hand and a reasonable OpEx to assets ratio, there will be ways to get through even months of non-repayments through tolerable cuts to management and staff salaries, made easier by reduced commissions to loan officers. In other words, most well-run FSPs have a few months of breathing space here.

The third driver of illiquidity is the maturing of debt to investors. This is the most severe threat to the institution - and in aggregate, to the sector. Investors like to think of themselves here as the proverbial white knights - rushing in to save institutions. But saving them from whom? The answer is from the investors themselves. The average maturity of debt from foreign investors to FSPs is 22 months, meaning that more than a quarter of all foreign debt has to be repaid every six months. If investors lack the flexibility, prescience and resolve to offer broad-based moratoria on these repayments, many FSPs will die right there in the hospital bed.

But we’re getting ahead of ourselves. In this paper, we’re going to focus on the first of these issues - the importance of deposits - and then go deeper on the next two, with case studies and external contributions in subsequent posts.

At first glance, deposits represent arguably the most serious and immediate liquidity risk. Savings play a significant role in providing resilience to vulnerable clients, especially during crisis, as the current European Microfinance Award will show. Already in this crisis, savings have emerged as the go-to coping mechanism. But managing deposits during a crisis also poses serious challenges to FSPs, with a run on deposits being the greatest threat of all. The COVID threat to deposits follows a pattern fairly typical for financial crises - part driven by need, and part by fear. Savers facing sudden income shortfalls will seek to withdraw their deposits en masse. That initial wave of withdrawals to meet basic needs could trigger a subsequent and larger wave of withdrawals motivated by fear - fear that the deposits will be inaccessible later, that the institution might close, or more general comfort in a time of stress that having cash in the house is preferable to having it someplace else. There is also an element of herd behaviour creating a negative feedback loop as well: withdrawals lead to more withdrawals, whether needed or not. The pandemic has already seen examples of this with classic (and entirely unnecessary) runs on toilet paper in stores around the world.

However, there is one part of the fear that is quite relevant and even appropriate. Many institutions have seen closures forced by social distancing requirements - and these closures have often applied to FSP branches. Worse yet, these closures can be unpredictable and even vary by branch, as described by Shameran Abed during the FaivLive webinar (minute 22). In that environment, it’s entirely rational for a saver to want to withdraw her entire balance if she fears that she may not be able to access it later.

To counter these risks, most FSPs and financial institutions serving low-income households have one important advantage: the highly uneven distribution of deposits. Small accounts held by the poor comprise a major part of total clients, but only a small fraction of the balance. On the other end, a small number of wealthy clients hold the bulk of the balance. In between, there may be a chunk of customers - essentially the middle class - who comprise both a significant portion of the balance and also of outreach. 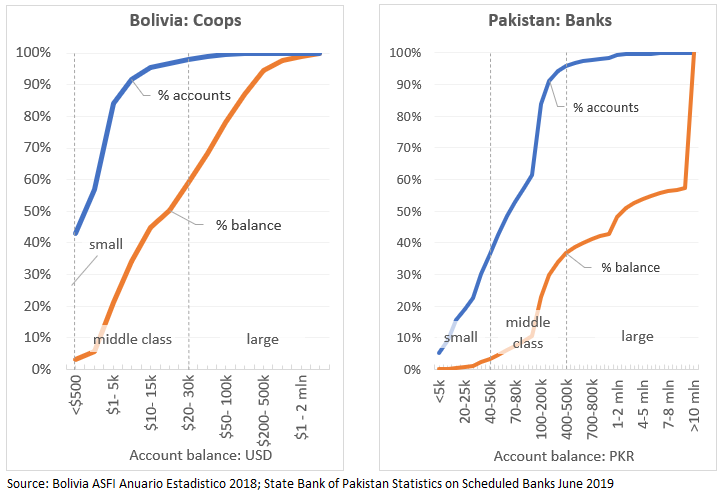 This structure suggests that withdrawals for necessities, which for poor clients may often mean the entire balance, would not put a significant burden on liquidity. The primary risk is to ensure the continuing confidence of the large depositors -- whose deposits need to be maintained at all costs. The experience of “Artemis” in Ghana described in Weathering the Storm is instructive:
"As Artemis entered a period of restructuring, which saw massive changes to its loan products and lending procedures, it zeroed in on the need to maintain depositor confidence. Whenever a client raised concerns or mentioned a rumour, she would be visited by the branch manager to allay her fears...and executives took a proactive approach to communicating with large clients…In the end, the FSP pulled off the feat: By the end of the year-long restructuring, not only had it avoided a bank run, Artemis actually increased its total deposits base".

While in-person visits are not viable at the moment due to social distancing, proactive outreach by phone or video can be an effective replacement. For middle-class customers, the key is to avoid any reason for them to panic; institutions must focus on having the liquidity on hand to meet a large number of withdrawals, which should reduce the risk of a follow-on panic.

So the strategy regarding deposits is almost counter-intuitive. The best thing institutions can do is ensure that clients can safely withdraw their funds, even in the time of social distancing. It’s worth considering waiving withdrawal fees and limits on withdrawal frequency. To reduce likely queuing, FSPs could even consider raising limits on withdrawals at ATMs, to make it easier for these middle-class customers to withdraw significant amounts, even if not their entire balances. All these changes should be actively communicated to clients - as a way of making their financial lives a little bit less precarious in a time of stress. At the same time, FSPs should proactively reach out to their large savers, understand their needs, and provide attractive opportunities to roll over maturing time deposits.

This strategy - maximum access for the ‘99%’; tailored attention for the ‘1%’ - has benefits that go beyond liquidity. An institution that successfully pursues it will be seen as especially responsive during the pandemic and will earn long-lasting trust and confidence of its clients. And it may also gain new clients too, for there is evidence that demand for deposits can increase during times of stress. For example, during the civil war in Syria, First Microfinance Institution found that demand for deposits increased, as the risk of keeping cash at home grew. Meanwhile, keeping services open and flexible (for example, allowing early withdrawal for time deposit clients suffering their own liquidity crisis) increased its reputation, ensuring that depositors would continue to trust the institution with their money.

Of course the success of this strategy is not guaranteed. Two confounding factors are monetary instability, whether in terms of a depreciation relative to other currencies or in terms of overall inflation. The pandemic has already had a serious impact on the currencies of many countries. Inflation - for example as a result of unsustainable efforts by governments trying to provide support to their people - may yet become a risk. In either case, few factors motivate savers to empty their accounts more than the fear of losing the value of their savings. And that fear affects all savers, small and large alike. FSPs have limited means to react in such situations. If they can offer foreign currency accounts, that helps. But absent that, there is almost nothing the FSP can do to avoid a run.

Such situations nearly always mandate active involvement by the country’s authorities, whether the Central Bank or other parts of government. Their response might mitigate or worsen the situation. And in the financial inclusion sector, there’s the additional risk that different institutions might be affected very differently by government actions as a result of their legal status. We will address the role of Central Banks and other authorities in this time of pandemic in a separate article, but for the time being, it’s sufficient to note that, at least when it comes to deposits, their role will be greater than that of any other outside institution.

Limits on withdrawals and fresh funding

Finally, a crisis of this magnitude inevitably raises the question of explicit limits on withdrawals by depositors. Those may come either from the regulator or the FSP itself seeing no other path. In either case, such withdrawal limits come at the cost of undermining customer confidence - not just during the crisis itself, but for years to come. Such an effort must truly be seen as a last-ditch attempt at survival, after all other options have been exhausted.

One such option is emergency liquidity funding, whether from the Central Bank, other government entities or DFIs entrusted with financial sector development and stabilisation. We will address their role, the OpEx and debt issues of liquidity, and how to maintain client and staff confidence in the upcoming articles.