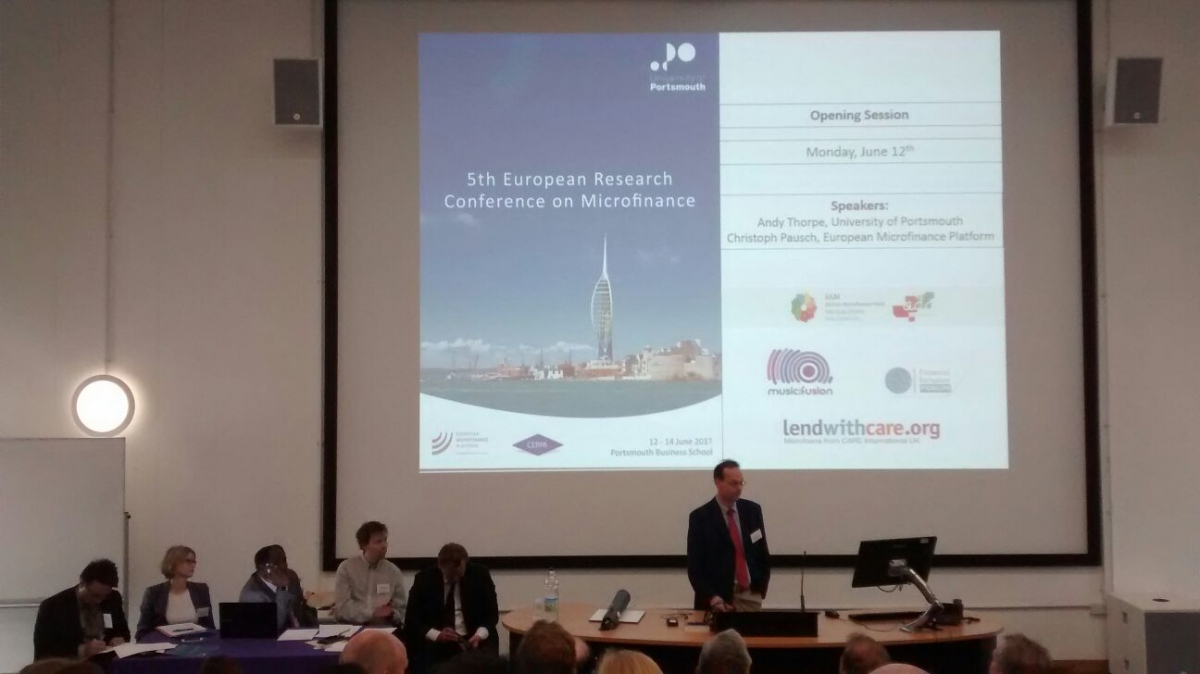 Portsmouth Business School was delighted to host the recent 5th European Research Conference on Microfinance from 12th to 14th June in England. Thankfully the weather gods obliged with over 130 delegates attending the event over each of the three days. A mix of established researchers with a number of leading practitioners infused the financial inclusion debate with insights and thought-provoking panel presentations. Topical themes across gender, Islamic microfinance, Fintech, research and the future of microfinance were probed in wide-ranging panel discussions.

The event was opened by Andy Thorpe (Portsmouth Business School) and Christoph Pausch (e-MFP) and commenced by asking whether microfinance would live to the year 2030, a chilling prospect in itself. If so, under what guise would it do so – is there still the well-trodden ‘promise’ of microfinance? What are the challenges to its realisation? In the opening session chaired by Dirk Zetzsche (University of Luxembourg) perspectives were shared by Marek Hudon (Université Libre de Bruxelles and CERMi), Annette Krauss (University of Zurich), Sam Mendelson (Financial Inclusion Forum UK and Arc Finance) and Kimanthi Mutua (Sidian Bank Kenya).

The panellists set the tone for the ensuing debate across increasing risks and regulation in the sector, the likelihood or not of possible downscaling by commercial banks and upscaling by microfinance institutions and the growing need for institutions to have appropriate strategies to survive. The panel arrived at a broad consensus as to the requirement to adjust to increasingly emerging technology-driven solutions in the context of growing levels of private capital and related product solutions offered by new market participants.

Following the opening panel, two parallel sessions allowed for the presentation of 42 research papers distributed by four streams: Products, Processes and Innovation; Clients and Social Performance; Markets and Regulation; and Institutions, Strategies and Performance. Closing the first day, the panel ‘Islamic Microfinance – faith-based cosmetic or an advance for everyone?’ was brought to the fore of the research agenda – Islamic Microfinance is a topic still underexplored by European researchers. The panel was moderated by Ajaz Khan (Care International UK) and valuable contributions were made by Malcolm Harper (Cranfield Management School), Habib Ahmed (University of Durham), Amjad Saqib (Akhuwat Pakistan) and Mohammed Kroessin (Islamic Relief Academy). The highly experienced academics and practitioners addressed a number of critical questions to understand Islamic Microfinance and, particularly, its differences and similitudes with conventional microfinance. 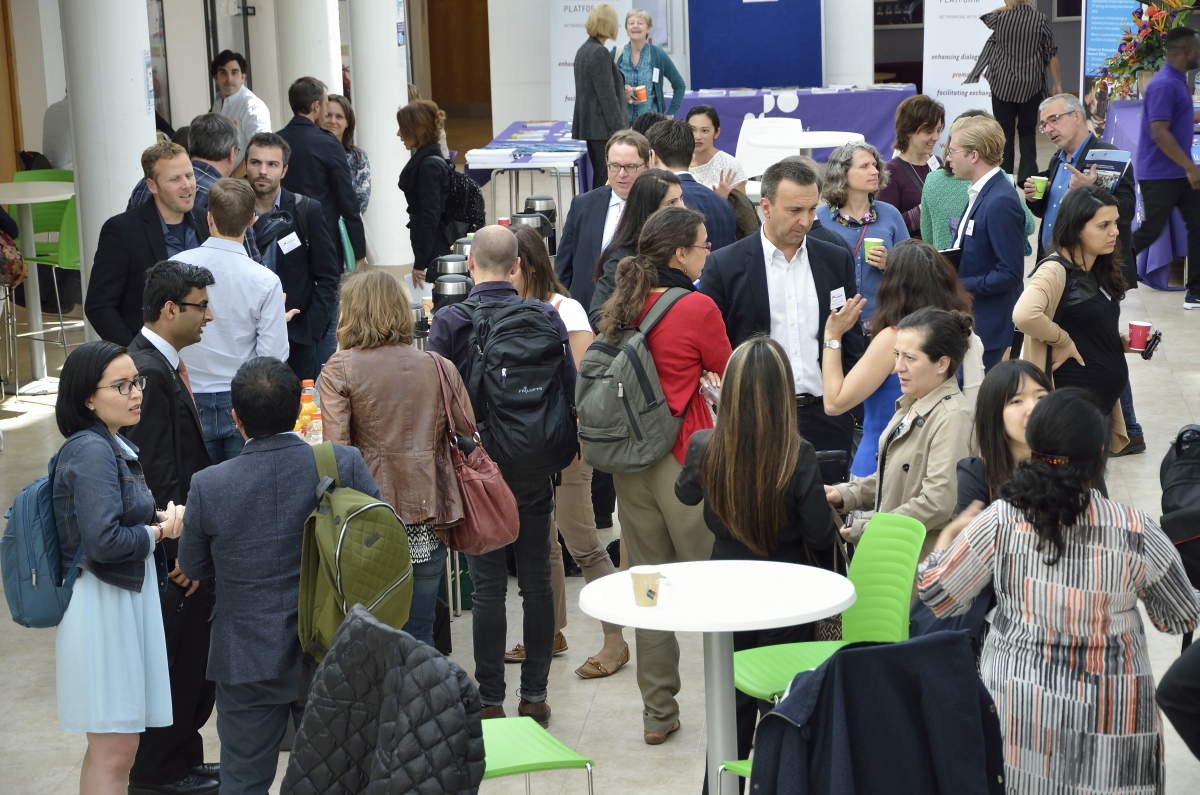 The second day opened with a panel discussion on the place of gender in the contemporary financial inclusion discourse. Susan Johnson (University of Bath), Isabelle Guérin (IRD France) and Supriya Garikipati (University of Liverpool) presented different approaches to the gender research agenda, highlighting themes such as the gender gap of digital financial inclusion; the moral and political economy of financial inclusion from a gender perspective; the fungibility of women’s loans, the need for the industry and research to focus on loan use and its outcomes, and how collective agency matters in women’s empowerment. Frances Sinha (M-CRIL/EDA) complemented the discussion with her vast experience as a practitioner in the sector and the results of an evaluation project in the north of India. For gender balance it is important to note that the panel was efficiently chaired by Robert Lensink (University of Groningen).

The third parallel session of paper presentations included 23 different research papers and preceded the afternoon plenary sessions which explored new frontiers in microfinance. Ariane Szafarz (ULB/CERMi) discussed social finance and its consistencies in mission with microfinance and Tyler Wry (The Wharton School) offered a sociological viewpoint on the relationship between outreach intensity and financial sustainability. The final panel of the day revolved around the increasing connections between Fintech and microfinance. If technology as a driver were to potentially yield the death-knell of microfinance as we know it, how then should Fintech be embraced or shaped to reach the bottom billion and more? The Fintech panel and parallel session attracted young entrepreneurs and researchers drawing on their combined experiences in research and practice. In the Fintech panel, Wei Wu (University of Birmingham) outlined the growth in crowdfunding platforms in China and Phil Mader (University of Sussex) related this to understanding the implications of the increased activity in the context of society and the wider political economy.

After Gunnar Camner of the GSMA outlined the challenges of the growing mobile economy in Africa, Niall Dennehy of Aid:Tech took to the floor to demystify the blockchain and its uses in forging digital identities and lowering transaction costs in existing financial products offered to the financially excluded, notably in terms of remittances. Questions from delegates challenged the permanence and immutability of data stored on the blockchain together with the much-espoused tenets of such solutions in delivering increased client-focused transparency.

The afternoon ended with a very special moment, the Best PhD Paper Award ceremony. Muluneh Hideto (ULB/University of Agder) took the first place with the paper ‘Association between Social Performance Rating Scores and Governance Structure in Microfinance Institutions’ and Francisco Bächler and Jann Goedecke were awarded the second place with the paper ‘Do multiple bank relationships push borrowers into indebtedness? Evidence from a microlending market’. The winners will receive €1000 and €500, respectively and were invited to present their work at the European Microfinance Week next November, courtesy of the European Microfinance Platform.

The conference highlights also include the social events held on both evenings of the event. Delegates had a chance to take time to meet old and new colleagues at the barbeque on Monday and at the networking event the following evening in Portsmouth Historic Dockyard. Tuesday evening was opened by Maude Massu of the Financial Inclusion Forum UK. Guests enjoyed a fantastic sunset and were treated to a moving performance by young people from a local charity, Music Fusion. The charity, led by Jinx Prowse, enables socially disadvantaged and deprived children to channel their inner emotions through music. ‘Valery’ by the late Amy Winehouse offered delegates a very memorable start to the evening. Through the generosity of delegates at the evening, Music Fusion is able to further its inspiring work in the local community.

The final day started with the last parallel session with 17 further paper presentations and concluded with a challenging panel on the role of research in microfinance. James Copestake (University of Bath) presented a flexible framework for reframing microfinance research while Maren Duvendack (University of East Anglia) drew attention to the methodological challenges faced by researchers in the sector. The panel moderated by Marc Labie (University of Mons/CERMi) followed with a number of provocations and suggestions from practitioners Maude Massu (Financial Inclusion Forum UK), Lucia Spaggiari (Microfinanza Rating/SPTF) and Grzegorz Galusek (Microfinance Centre).

The three days of the conference passed very quickly. They were full of new ideas, new approaches to old issues and emotions and hopefully they will shape new projects and collaborations in a near future. As the delegates waved goodbye to their days in Portsmouth, they eagerly awaited the announcement of the next destination for the conference!

Michael O'Connor is currently a senior lecturer in the accounting and financial management subject group at Portsmouth Business School. His professional background has included working as a consultant with Arthur Andersen and KPMG. This was followed by a length of time based in Russia together with experience gained in Central Asia and China, largely in developing local education businesses and partnerships. He graduated from the European Microfinance Programme in 2013 and has a general research focus linked to the use of technology in delivering increased transparency and efficiency in microfinance.

Joana Afonso is a PhD candidate at the Portsmouth Business School. She became involved with microfinance in Portugal where she was a microcredit officer and trainer at ANDC (Portuguese NGO) for seven years. In 2013 she completed the European Microfinance Programme at the Université Libre de Bruxelles (Belgium).  Her research has been focusing on microfinance field practices and on evaluation methodologies and has involved fieldwork in the Dominican Republic, Pakistan and Zimbabwe. She has published in the Journal of International Development and co-authored a chapter in the books “Crises of Microcredit” (Zed Books, 2015) and “Islamic Microfinance – Shari’ah compliant and sustainable?” (Practical Action, 2017).