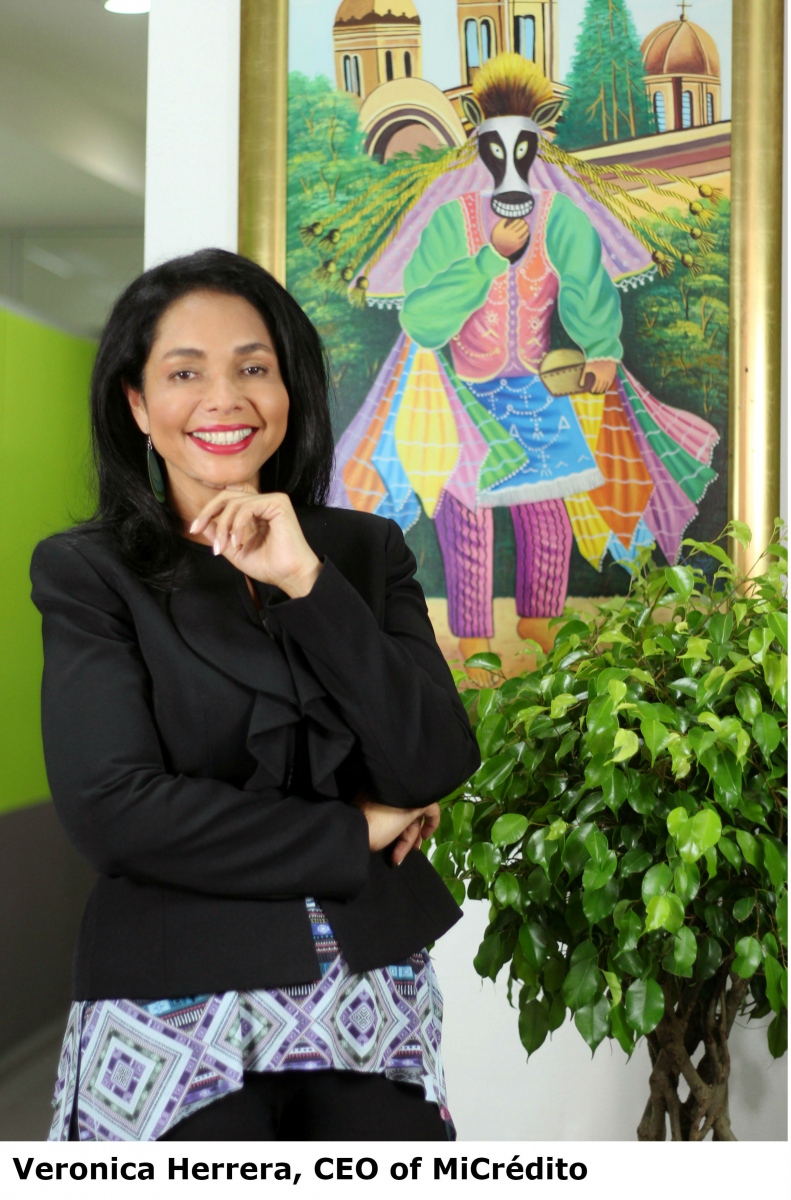 Veronica Herrera co-founded MiCrédito in 2004 with the support of the Canada-based development association MEDA (Mennonite Economic Development Associates). “Empowering youth is vital to see the change in Nicaragua that we seek” Mrs Herrera says. “I believe education, in addition to microfinance, is a powerful tool to […] empower youth” she adds. MiCrédito is one of few MFIs today in the country to provide student loans at very low interest rates, enabled through Kiva – the San Francisco-based not for profit. While the Sandinista government managed to reduce the illiteracy rate in the country dramatically in 1980 (from 50.3% to 12.9% within only five months[1]), which earned it the UNESCO Literacy Award, today’s education level in the country is relatively low compared to the rest of Latin America, with around 45% of the population attending secondary education, versus an average net enrolment rate of 74% in 2011 across Latin America[2]. In what could be her motto, Mrs Herrera adds: “How does one get out of poverty? It is through education”.

Daughter of micro-entrepreneurs, Mrs Herrera has been involved in microlending since the 1990s through Fundación CHISPA, which successfully pioneered the first microfinance programmes in Nicaragua through the support of MEDA. After establishing the first regulated MFI in the country, CONFIA, in 2000, MEDA and the management team later founded MiCrédito to specifically target the underserved rural market of the country. Today the company counts 116 employees and 12 subsidiaries spread across Nicaragua.

MiCrédito successfully survived the global financial crisis in 2008, which also hit the Nicaraguan microfinance sector. During this time, several clients defaulted on their debt and the microfinance payment culture deteriorated significantly, thus igniting a social Non-Payment Movement (“Movimiento No Pago” - MNP) composed mainly of farmers who protested the high interest rates and encouraged their followers to stop honouring their payments. Within this context, a number of microfinance institutions and NGOs defaulted, while many donors left the market: in less than three years since 2008, total microcredit portfolio in the country dropped 52%[3].

Questioned about the factors behind the endurance of her organisation throughout the tough MNP years, Mrs Herrera lists four key factors. The first one is “creativity”: the introduction of innovative services such as microinsurance which served the same customer segment. “These [services] were like the heroes of the story because they increased and sustained the turnover” she explains. She emphasises the importance of a committed team – especially at the managerial level - that is willing to cut its pay to help bring down costs, like she did together with two other senior managers during this time. Another key factor was the presence of a long-term partner like MEDA, as well as a committed donor like Kiva, which supported MiCrédito during the MNP. Finally, Mrs Herrera mentions client loyalty: although the company experienced default rates as high as 15% between 2009 and 2011, MiCrédito managed to maintain a loyal client base whereby the majority of the clients honoured their payments: “I tried to encourage my team […] we need to keep fighting for the 85% that is still paying [its debts]” she added.

The MNP prompted significant changes for the broader financial services sector in Nicaragua: “the crisis is the mother of innovation”, she points out, “much of the [microfinance] industry reinvented itself”. Historically, the country has relied heavily on public remittances and international donors. Starting in the late 90s when private banking was legalised, several microfinance institutions (MFIs) emerged with the support from international donors, which viewed microfinance as a tool to reduce poverty: between 2000 and 2008 the microﬁnance industry experienced exceptional growth, especially in the regulated segment (42% annual growth) which received the bulk of the multilateral support[4]. At its apex, the Nicaraguan MFIs disbursed a total of US$ 560 million[5] loan amount to over half a million clients, i.e. about 10% of the total population. 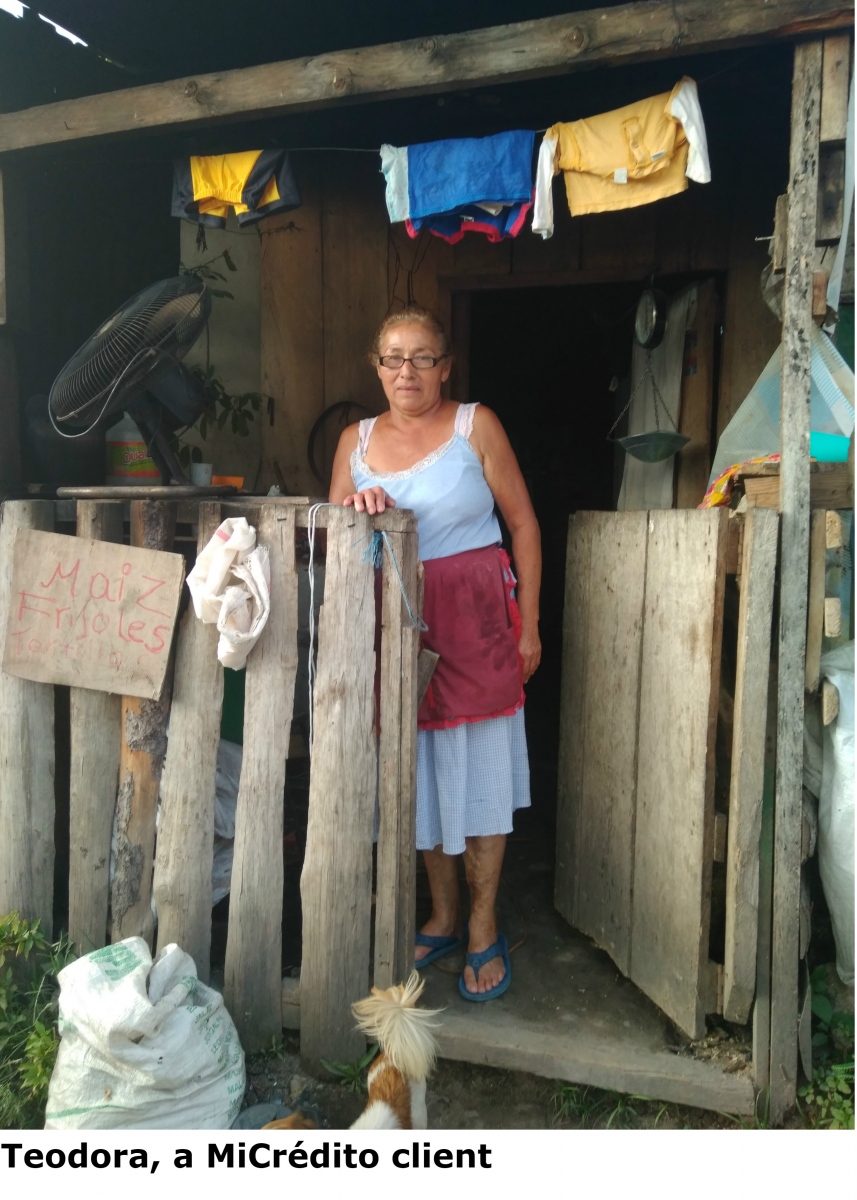 During the crisis, however, “some not-for-profit organisations looked for new business models […] by seeking funding from private investors” Mrs Herrera explains. In addition, the MNP prompted microfinance providers to streamline their operations, adopt stricter criteria when disbursing the loans, and select clients more carefully, she adds. Although at the macro-economic level the market shrank with the collapse of some financial institutions focusing on rural clients, such as Banex, these voids opened up new opportunities for the remaining actors, according to Mrs Herrera. In addition, microfinance institutions and banks started reporting regularly to the credit bureaus to help prevent similar situations in the future, she explains. Credit bureaus have thus played a pivotal role in reducing the risk of over-indebtedness and identifying members of the MNP. Today the country boasts one public credit registry and two credit bureaus, Transunion and Sin Riesgo. The first focuses mainly on the banking sector, while the second, which is owned by NGOs affiliated with the Asociacion Nicaragüense de Instituciones de Microfinazas (ASOMIF)[6], focuses on the microfinance sector. The databases of the credit bureaus are fed by data delivered independently by regulated and non-regulated financial institutions in Nicaragua.

The microfinance sector in the country today is primarily driven by consumer credit: nearly half the loans registered in 2016 by the microfinance institutions adhering to CONAMI – the National Microfinance Commission (Comisión Nacional de Microfinanzas) - are used to finance consumer credit (48%), followed by commerce (22%)[7]. Consumer credit has gained considerable ground since the financial crises, and it grew by about 26% per annum since 2014. However, Mrs Herrera argues these data do not necessarily signal overindebtedness due to the fact that today’s financial institutions providing consumer credit are regulated and therefore their practices are more transparent. “I believe that if we teach people to have an appropriate consumption, we can help generating jobs in other areas” she adds. This is particularly true if directed toward the productive sectors of the country, including the agricultural sector and the small entrepreneurs, which are at the core of microfinance institutions like MiCrédito, she stresses.

Nicaragua today has progressed from one of the poorest and most heavily indebted countries of Central America in the early 2000s[8], to the second fastest growing economy of the region after Panama, registering a 4.5% growth in 2016[9]. Public debt shrank from the heights of 117% of GDP in 2003, to nearly 30% of GDP in 2015[10]. Social development followed through: the number of people below the poverty line also decreased from 20.5% in 2001 to 6.2% of the population of 6.1 million in 2015[11]. However, social disparities persist, with the richest 20% detaining over 52% of the resources[12].

If on the one hand the Léon-born mother of three demystifies consumption credit, she also emphasises the importance of enabling people in the bottom of the pyramid to save money. According to Mrs Herrera, Nicaragua lacks a “financial democracy”, given that the banking system is dominated by five banks which impose minimum requirements for clients to access a savings account. Therefore, a proportion of the population today is still excluded from the banking system, and thus from any savings products. Through her presence on the board of ASOMIF, Mrs Herrera is pushing to change the current law 769 of promotion and regulation of microfinance introduced in 2011, by enabling microfinance institutions like MiCrédito to provide saving services in addition to credit services. She believes this would allow MFIs to reduce interest rates to their clients through a reduction in financial costs, as well as benefit the whole economy through the inclusion of about half million people (i.e. those currently served by the institutions registered in ASOMIF) which today are excluded from the macroeconomic statistics of the country. Mrs Herrera, who speaks softly and persuasively, is very determined in pursuing her goals within the microfinance sector. “I think this is a matter of justice” she says.

[2] UNESCO, 2014. Regional Report about Education for All in Latin America and the Caribbean. Retrieved from: http://www.unesco.org/fileadmin/MULTIMEDIA/HQ/ED/ED_new/pdf/LAC-GEM-2014-ENG.pdf

Marina Iodice is a France-based professional with international experience in responsible finance and sustainable development. She is currently on sabbatical pursuing a Fellowship programme with Kiva in Nicaragua, where she is responsible for partner monitoring and operations management with three different types of institutions involved in micro-credit, among which MiCrédito. She holds a position as Responsible Investment Analyst at Mirova, where she focuses on the energy and healthcare sectors in order to integrate environmental, social and governance (ESG) indicators into investment analysis and engage with corporations to improve their practices. Prior to joining Mirova, she worked in sustainable investing and climate change consulting in London at F&C Investments and at Irbaris. Marina graduated in Economics and Management at the Bocconi University in Milan and holds a Master’s degree in Environmental Technology from the Imperial College in the UK. She is an Italian National and speaks five languages.

About Kiva : Kiva (www.kiva.org) is a mission-driven technology company that runs a global marketplace platform for crowd-funded micro-loans to serve the financially excluded. In just 12 years, Kiva has raised over $1 billion in loan capital for nearly 2 million borrowers in over 85 countries. Headquartered in San Francisco with offices in New York, Nairobi, Mexico City and Bangkok, Kiva's team has 100+ employees and 500+ volunteers worldwide.