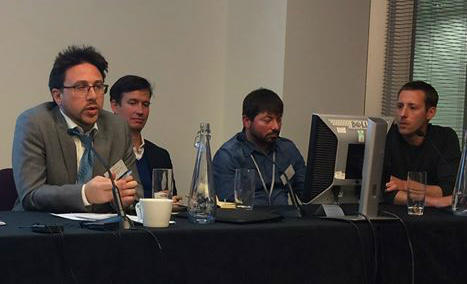 The second e-MFP ‘Offsite Session’[1] of the year took place in London on Monday 10th April, in partnership with the UK’s Financial Inclusion Forum – the leading British financial inclusion network. The session was entitled The Role of MFIs in improving access to and quality of education: Perspectives on the 7th European Microfinance Award and the European Dialogue and was timed to coincide both with the launch of Investing in Tomorrow (e-MFP’s latest Dialogue) and last week’s launch of the call for applications for the upcoming Award on Housing.

The event brought together a panel including Arc Finance’s Sam Mendelson (who was the lead author of the paper, as well as a member of the Award Selection Committee), Kaspar Wansleben from Luxembourg Microfinance and Development Fund (a supporter of two of the 2016 Award finalists and key investor in education finance) and Nathan Byrd from Opportunity International’s Education Finance team, along with e-MFP’s Daniel Rozas (who has supported the management of the Award for the past three years). Katy Jones from Big Issue Invest and the Financial Inclusion Forum chaired the packed out event, generously hosted by Allen & Overy.

Daniel opened the session by outlining the importance of education – its primary importance to households at all income levels and in all places, and the obstacles to universal access in low-income countries. The failure or inability of governments to provide free or affordable quality education to its people is a key reason for the emergence of low-cost private schools in many countries (and the channel for several of the Award semi-finalists’ initiatives). The role of microfinance in expanding beyond core enterprise credit to include education support can be a broad one; Daniel laid out a matrix of potential initiatives by MFIs that was included in the Dialogue: from the supply side financial and non-financial support to schools to the demand side support to families who may need to borrow or save to afford tuition and the associated costs, or have that education insured in the event of a family shock.

The Award started with 30 applications from 19 countries and was whittled down over two assessment stages to 10 semi-finalists and three finalists. Sam presented a brief summary of each of the semi-finalists’ initiatives, divided into three broad categories: organisations that work with schools for children; those that focus on families and communities; and those that work primarily with and for young adults. While the semi-finalists represent a broad array of interventions to address different aspects of education access in varied context, there are commonalities among the best initiatives, which Sam outlined as: combining both financial and non-financial services; combining both demand- and supply-side interventions; client-centricity; high levels of embeddedness and institutional commitment; and extensive use of partnerships.

Opportunity International is the parent organisation of Opportunity Bank Uganda Limited – one of the Award finalists. Nathan described Opportunity’s desire to demonstrate the immense demand for education finance in the bottom strata of the economic pyramid, having already invested US$83 million in education loans to 160,000 beneficiaries in 14 countries, with a current active portfolio of US$22.2 million which had created over 275,000 new seats in schools. Big Data credit modeling provides live decision tools across all aspects of the program, and equally important is the Monitoring and Evaluation of target schools. Nathan invoked a Maslow-style Hierarchy of Needs among schools in which poor schools provide only the most basic needs, and higher-order educational services are achieved by better schools.

Opportunity’s Education Finance team is extremely bullish on the prospects for this market, with Nathan describing a market of over 300 million households. For this reason, its efforts have been highly focused on demonstrating both the financial and social value propositions of its edufinance program in a broad range of microfinance institutions, the majority of these coming from outside Opportunity’s network.

Kaspar then gave the investor perspective, with a particular focus on higher education finance in Latin American through the Higher Education Finance Fund, in which LMDF invests. Why does this matter at this stage of development of the microfinance market and where do investors see the promising avenues between education and microfinance and which role can they play in developing the space? With demand for microcredit loans reaching its logical limits in many established markets, the need to diversify to serving the financial needs of others, including non-microentrepreneurs is becoming increasingly important. New areas, such as education finance, are thus a key element into meeting the commitments of social investors to expanding financial inclusion. But this also requires new types of financial vehicles, including longer-term and lower-cost funding.

An engaged, informed and largely socially-focused audience had several questions for the panel, including on affordability of credit products, the consequences of expanding finance to low-cost private schools, on the role of government in education; the threshold or definition – if any – for what ‘low cost’ means, whether savings rather than credit should be the primary encouraged channel for educational finance, and how the impact of any initiatives can be independently measured.

The event wound up with networking over drinks but not before Daniel announced this week’s launch of the Call for Applications for the upcoming Award, on Microfinance for Housing. Plans are in place for another offsite event a year from now, at which the semi-finalists of this next Award can be presented and discussion stimulated on how MFIs can finally work to make quality housing safe and affordable for hundreds of millions of low-income families.

[1] Offsite Sessions are a new activity developed under our Strategic Plan 2017-2021 which take place in different e-MFP members’ countries and provide e-MFP with opportunities for more frequent touchpoints with its members and external stakeholders besides the European Microfinance Week.