As the European Microfinance Award 2020 on 'Encouraging Effective & Inclusive Savings' moves to its final Selection Committee and High Jury stages, and the announcement of the winner during European Microfinance Week in November, e-MFP is publishing pieces from various experts who have worked in Savings over the decades. Following on from Hans Dieter Seibel’s kick-off blog, this is the second in the series from Stuart Rutherford, a pioneer in the field.

Then and now
Think ‘Bangladesh’ and you probably think ‘microcredit’. Rightly so. BRAC and Grameen Bank pioneered joint-liability credit groups for the poor in the 1970s. ASA hugely improved the model’s efficiency and it soon spread around the world.

But look at a recent Grameen Bank balance sheet. As of 2018 Grameen Bank borrowers had loans worth 154 billion taka (about US$1.8 billion). But its savers held deposits worth 221 billion taka ($2.7 billion). The bank that pioneered loans for poor households now holds a lot of their savings.

What happened at Grameen Bank
In 1997 enthusiasts from more than 130 countries gathered in Washington DC for a ‘Microcredit Summit’. Despite some grumbling by those who would have liked a Microfinance Summit (promoting savings as well as loans) the focus was firmly on credit. At a preparatory meeting a year earlier I had heard Muhammad Yunus, the founder of Grameen Bank, tell his audience that the poor had little use for savings. In this spirit, the Summit launched a campaign to raise money to bring microcredit to a hundred million poor households by 2005.

But by the end of the century Grameen Bank, microcredit’s flagship, was in deep trouble. The immediate cause was heavy seasonal flooding, and the immediate solution was to seek further concessionary funds. But the underlying cause was structural, and it was the savings of Bangladeshi households, not money from international donors, that finally solved the problem.

The structural problem lay in microcredit’s core product, a loan that was repaid in small weekly instalments over a year and followed immediately by a fresh and somewhat larger loan. The loans were meant to be invested in businesses that would thereby grow, allowing for yet more credit and yet more growth year after year, until poor households emerged entirely from poverty.

Some clients did achieve this, and microcredit providers celebrated their success stories. But most clients did not in fact run growing businesses and used the loans for other spending needs. In the group setting it was hard to lend some borrowers less than others, so just about everyone’s loans increased each cycle. If the weekly repayment amount was still small enough to be found from regular household cash flow, that didn’t matter. But the relentless growth in loan values meant that, sooner or later, weekly repayments became larger than such households could afford. They fell into arrears, defaulted, or even absconded. Yunus himself wrote:

More and more borrowers fell off the track. Then there was the multiplier effect. If one borrower stopped payments, it encouraged others to follow…..

The floods left many borrowers temporarily unable to make any repayments and turned this problem into a full-blown liquidity crisis. Appeals for funds from donors met with disappointing results. The very existence of the bank was at stake. Grameen had to act.

Grameen II
In 2005 I wrote an account of what Grameen did. They rebranded as ‘Grameen II’ and made three big sets of changes. They modified the credit model; took deposits from the general public; and launched new savings products for the clients.

As part of the changes to the credit model, they abandoned joint-liability and clients were treated more as individuals, so those without growing incomes were less likely to be offered bigger and bigger loans. This went some way towards correcting the structural problem noted above.

Taking deposits from the general public proved successful. Better-off villagers were persuaded to transfer their savings from regular banks into Grameen, where they got better interest rates and the moral glow of knowing they were thereby helping their poorer neighbours to get Grameen loans.

But the transformative changes were in the savings services for the regular clients. To help secure the loans Grameen had always required borrowers to make small weekly compulsory savings which couldn’t be withdrawn until the account was closed and all loans repaid. From each loan 5% was deducted and stored in a ‘Group Fund’ over which clients had nominal, but staff had actual, control. Over time, it grew large ($66 million by 1995) and unpopular: clients had started agitating against it.

Under Grameen II the Group Fund money was redistributed into individual accounts held by each client. These are ordinary ‘passbook’ savings account where any amount can be paid in or withdrawn at any time. Then Grameen introduced a cumulative savings scheme modelled on the popular ‘Deposit Pension Savings’ that regular banks offer to better-off Bangladeshis. In the ‘Grameen Pension Savings’ (GPS), Grameen clients save a fixed monthly sum for 5 or 10 years. At maturity, generous interest is paid. They can be prematurely withdrawn in an emergency at a lower interest rate, and clients can hold more than one GPS at a time.

The results were impressive. From August 2002 (when Grameen II reached every branch) to the end of 2005, the number of low-income clients (not including the villagers using the public savings accounts) grew from 2.3 to 5.7 million. Their savings at the bank tripled from $90 million (mostly transferred from the old Group Fund) to $270 million. In July 2004 the Bank’s saving portfolio exceeded its loan portfolio for the first time. Grameen no longer needed to tap outside sources to fund its lending. Savings had saved Grameen.

A 2020 snapshot
To understand the situation two decades later we turn to a ‘financial diary’ project in central Bangladesh which since mid-2015 has recorded the daily money transactions of sixty low-income ‘diarist’ households, who make a living from their own labour or from small-scale trading.

Of these 60 households, 51 hold savings accounts at formal institutions – mostly at MFIs, a few at banks and Co-ops. Between them they hold $45,122, or about $884 each. We lack the data to make historical comparisons, but our diarists say that such balances were unheard of twenty years ago. A quarter of these balances are in the cumulative savings accounts known as DPS’s or GPS’s, again mostly in MFIs. Twenty years ago, no household like those of our diarists held this kind of account. Grameen Bank’s own share of these cumulative savings balances is about one quarter, showing how the scheme has proliferated among other MFIs, whose clients have increasingly demanded them.

Another way to see how clients have changed the way they use MFIs is to compare their saving and loan balances. We noted that 51 diarists hold $45,122 of savings. A smaller number, 36, have loans outstanding, worth $19,901, again mostly at MFIs. Bangladesh’s low-income households have survived the determined attempt by microcredit providers to turn them into permanent borrowers and have reverted to a more common behaviour, in which most of them are saving most of the time and some of them are borrowing some of the time.

The grammar of savings 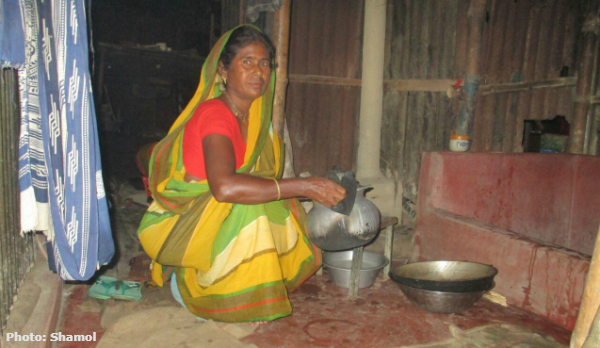 The numbers just quoted measure our diarists’ stock of savings. But to understand how and why poor people save we need also to look at the flows.

Falguni, one of our diarists, is illiterate and makes a living repairing dirt roads. By World Bank standards her tiny income puts her among the ‘extreme poor’. Early in her marriage she was widowed and has brought up two children on her own.

Her first savings outside her home came when she joined the local ghoroya samity, a neighbourhood ASCA (an accumulating savings and credit association) like those mentioned by Hans Dieter Seibel in the first blog in this series. Since 2004 she has saved 20 taka (about 24 cents) almost every day there, making up any missed payments the next day. Our diary project has tracked these savings for the last five years (during which she saved $370 in this way), and seen her withdraw her savings five times, for her daughter’s marriage, to repair her tin roof, and to instal a water pump.

Falguni’s samity reminds us that saving is a verb as well as a noun. People whose salaries magically appear in the bank each month usually think of savings as a noun – money in a bank account or in securities – and for them success in saving means building ever bigger balances. But poor people like Falguni have to manage their own money, so for them saving is more often a verb – a daily or weekly task – and success in saving means assembling enough money at one time to buy the things that need to be bought. ASCAs turn their series of small set-asides into usefully large sums.

In 2007 Falguni joined ASA, a major MFI. She treats it with the same discipline she brings to her samity. We have tracked her repaying the same amount each week for the last five years, since she always takes the same size loan. She uses the loans for similar purposes as her samity withdrawals. 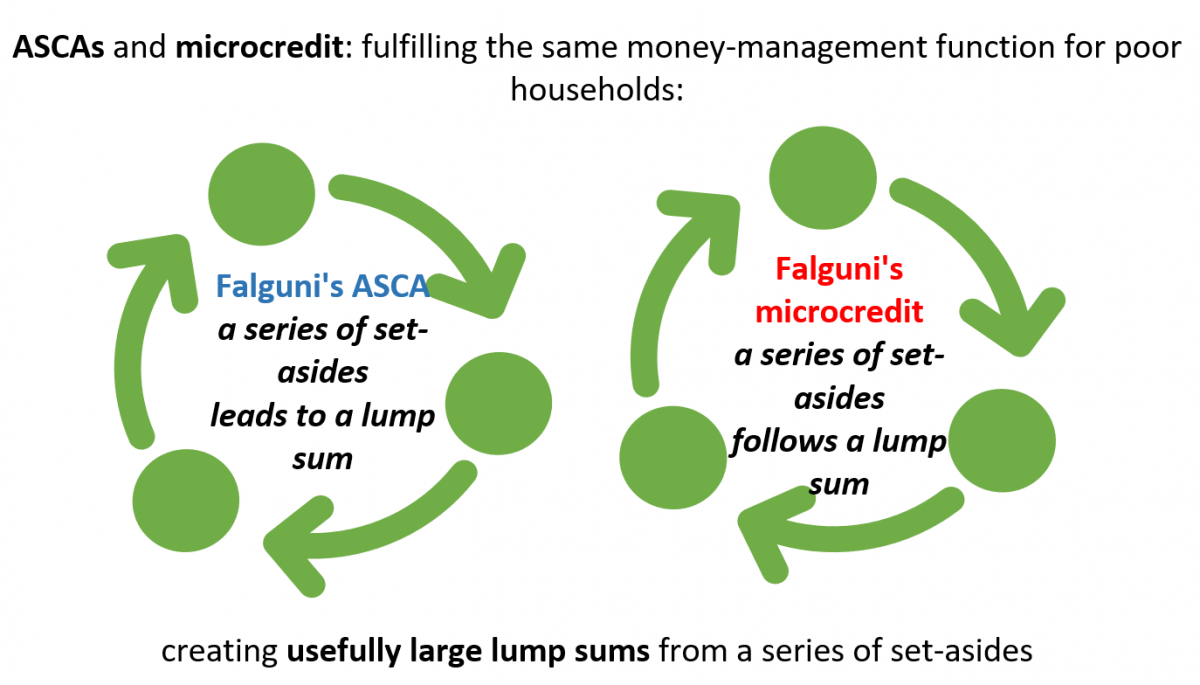 In Falguni’s samity savings, and in her ASA loans, she repeats the same process cycle after cycle. As the diagram shows, repeating cycles blur the distinction between saving (the ASCA) and borrowing (microcredit). Though we may think of savings and loans as diametric opposites, they are in fact variants of the same thing – a series of small set-asides that create usefully large lump sums of money.

One difference between ASCAs and microcredit is how the size of the lump sum is decided. In Falguni’s samity, it depends on how much she sets aside each day, which is her decision and is limited by her capacity. Early microcredit lacked that ‘self-limiting’ feature, and ever-larger loan sizes drove up set-aside values until they were unsustainable. That’s microcredit’s ‘structural flaw’.

Our diarists have learned that lesson well, which is why fewer of them now take microcredit loans and many who do, like Falguni, carefully keep the loan size within manageable limits.

Falguni also has a DPS, at a local Co-operative. It is another ‘self-limiting’ and sustainable savings device, but with a long ten-year life, making it suitable not just for roof-sheets and water-pumps, but for life’s biggest spending needs, even as a substitute for a pension. Falguni withdrew a large sum from her DPS last year, for her daughter’s marriage, but she still has $2,400 saved there. Not bad for a daily labourer in a poor village. That’s the power of Bangladesh’s savings revolution.

All fieldwork for the Hrishipara Daily Diaries Project is now being funded by L-IFT. We gratefully acknowledge their invaluable support.

Stuart Rutherford is interested in how poor people manage their money. He has followed that interest as a researcher, consultant, evaluator, and practitioner. He founded the MFI SafeSave in Dhaka in 1996, and is the author of many articles and three books. With David Hulme of Manchester University he devised the 'financial diaries' research methodology and carried out the first ever diary project in Bangladesh in 1999-2000. He is currently running a long-term diaries project in central Bangladesh. He now lives in Japan.