I could not have been happier when I heard that this year the European Microfinance Platform is focusing on housing microfinance.

both funders and financial institutions alike should take note and pay close attention. Within these concerning figures, which only seem to move upward, an opportunity is evidenced. A good portion of the individuals denoted by these statistics have been or are served by traditional microfinance loans, which are frequently diverted towards efforts to improve housing conditions.

There are many shelter challenges facing low-income households, and, probably, the biggest one remains access to finance. Traditional housing financing methods, such as mortgages and developer financing, are not designed to meet the needs of low-income populations in emerging markets. These households typically have undocumented and volatile incomes and lack the collateral or guarantee for a typical mortgage loan. Indeed, World Bank data demon­strates that fewer individuals in developing countries have outstanding loans directed toward formal house purchases with more loans directed toward housing construction.[iii]

The microfinance sector, which responded to the challenge of serving the financially excluded, has now an opportunity to respond to the vast demand for housing loans that can serve low-income groups, who remain unserved by the traditional financial sector. Microfinance institutions that take up this opportunity can achieve a double bottom line: increasing financial revenues by adding such housing finance products and helping to reduce the housing deficit among low-income households by unlocking a door that is tailored to their needs and capacities. Efforts in this area demonstrate that housing microfinance presents a new, vibrant market opportunity for the financial and microfinance sector at large.

In fact, every day we see more institutions adding differentiated housing microfinance products to their portfolios. Housing microfinance is gaining popularity and earning legitimacy as part of microfinance institutions’ business, helped in part by the desire of institutions’ to not only serve the needs of micro-entrepreneurs but to also further access to health, education and housing—the three big priorities of low-income households around the world.[iv] However, the supply of such services still lags far below the natural client demand.

The uniqueness of housing microfinance is that though it utilizes the same principles applied to other microfinance products, it applies them to the progressive, or incremental, housing improvement process that the majority of the developing world uses to build, expand and repair their houses. Essentially it uses small, non-mortgage-backed loans offered in succession to support the existing incremental building practices of low-income populations. This can include a range of financial services that support informal shelter improvements such as home repairs, expansions, the addition of water and sanitation services, and energy efficiency upgrades. 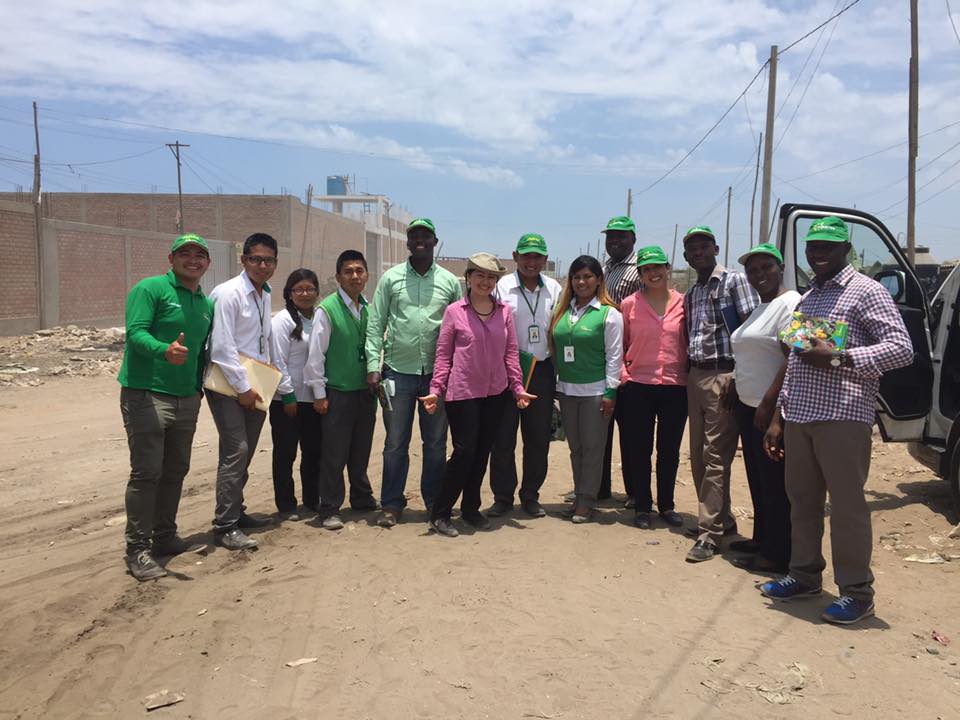 As I write this blog, I am with representatives of two leading financial institutions, KWFT of Kenya and Centenary Bank of Uganda. We are on our way to visit Mibanco in Peru to learn from the latter institution’s experience with their “mi casa” product which finances the progressive construction needs of low-income populations. Mibanco, which was acquired by Edyficar in 2014, is a Peruvian microfinance bank that currently has more than 100,000 active housing microfinance loans and an average loan size of US$2,500, though the maximum loan amount is US$15,000. The mi casa product is currently reaching 66% of clients with incomes of up to twice the national minimum wage, and the majority of the loans are used for small scale, progressive construction.

In 2009, with a housing deficit of more than 1.8 million homes, Peru was grappling with a serious housing shortage that disproportionately affected low-income households. Habitat for Humanity partnered with Edyficar (now known as Mibanco) to develop a dedicated housing microfinance product that complemented their existing housing product which was reaching predominately middle income populations. Habitat’s desire to combat inadequate shelter aligned with the financial institution’s desire to develop a product that could reach a lower-income segment of the population. The resulting partnership produced one of the most successful stories in the sector and paved the way for the work Habitat for Humanity now does through the Terwilliger Center for Innovation in Shelter to support financial institutions in the design and/or refinement of housing microfinance products.

In response to one of these challenges, in 2012, Habitat for Humanity launched the MicroBuild Fund, a US$100 million investment fund for housing microfinance. The fund is the first microfinance investment vehicle to demonstrate the viability of housing microfinance by offering financial institutions longer-term capital to grow housing microfinance portfolios for low-income households. In addition, MicroBuild investees receive technical assistance from Habitat’s Terwilliger Center for Innovation in Shelter to help them refine and expand those products. There is, however, a continued need for additional funding of this type and the further support in the design of the products.

The European Microfinance Platform’s focus on housing during 2017 represents a crucial opportunity to advance the conversation around the most pressing challenges facing this emerging, yet nascent sector, and to unlock markets in a way that will support funders, institutions, and clients with one end in mind: reducing the alarming deficit of affordable, safe housing around the globe.

Sandra Prieto serves as Director of Global Operations and Financial Inclusion at Habitat for Humanity International’s Terwilliger Center for Innovation in Shelter, where she works to promote inclusion of low-income populations in the housing finance sector. With over 21 years of international development experience, Sandra has trained over 400 practitioners and 150 consultants in housing microfinance; authored papers on affordable housing value chains and government-based mechanisms for affordable housing; and served as editor of Housing Microfinance Product Development: A Handbook and the Terwilliger Center’s annual State of Housing Microfinance report.

To learn more about the work of the Terwilliger Center for Innovation in Shelter, email tcis@habitat.org or visit www.habitat.org/tcis

Sandra, great insights that will spur and excite the microfinance and mortgage housing practitioners to consider such innovative  HMF approach..

My own views on the subject of affordablehousing worldwide, and on the African continent , in particular,can be szummarized in a few words. Before planning for the construction of affordable houses, one should concentrate upon creating new jobs that will provide the workers with the means to pay for their affordable homes.The construction of new factories and affordable homes should be planned and executed simultaneously, if one wants the project to be successful. This is particularly true in the case of Nigeria, a country that suffers from a 17 million housing deficit, as acknowledged by this country's President.